Antidepressant effects of exercise - a mechanism

Here is an interesting bit from Hunsberger et al. in Nature Medicine, which suggests that a nerve growth factor pathway might be a target for antidepressant drug development (exercise might do the same thing, but depressed people usually aren't that keen on working out): 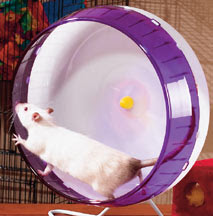 Exercise has many health benefits, including antidepressant actions in depressed human subjects, but the mechanisms underlying these effects have not been elucidated. We used a custom microarray to identify a previously undescribed profile of exercise-regulated genes in the mouse hippocampus, a brain region implicated in mood and antidepressant response. Pathway analysis of the regulated genes shows that exercise upregulates a neurotrophic factor signaling cascade that has been implicated in the actions of antidepressants. One of the most highly regulated target genes of exercise and of the growth factor pathway is the gene encoding the VGF nerve growth factor, a peptide precursor previously shown to influence synaptic plasticity and metabolism. We show that administration of a synthetic VGF-derived peptide produces a robust antidepressant response in mice and, conversely, that mutation of VGF in mice produces the opposite effects. The results suggest a new role for VGF and identify VGF signaling as a potential therapeutic target for antidepressant drug development.

Posted by Deric Bownds at 6:30 AM
Email ThisBlogThis!Share to TwitterShare to FacebookShare to Pinterest
Blog Categories: brain plasticity, fear/anxiety/stress