More on the evils of multitasking.

In a comment below, MindBlog reader Gregory points to a great article in the Atlantic on the toxic mental effects of multitasking. I wanted to bring the link into this separate post so that more of you will see it. It is by culture/technology commentator Walter Kirn: 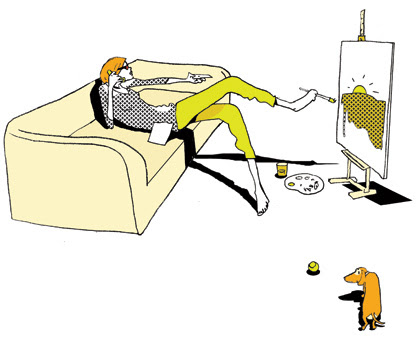 Neuroscience is confirming what we all suspect: Multitasking is dumbing us down and driving us crazy. One man’s odyssey through the nightmare of infinite connectivity

...Multitasking messes with the brain in several ways. At the most basic level, the mental balancing acts that it requires—the constant switching and pivoting—energize regions of the brain that specialize in visual processing and physical coordination and simultaneously appear to shortchange some of the higher areas related to memory and learning. We concentrate on the act of concentration at the expense of whatever it is that we’re supposed to be concentrating on.

What does this mean in practice? Consider a recent experiment at UCLA, where researchers asked a group of 20-somethings to sort index cards in two trials, once in silence and once while simultaneously listening for specific tones in a series of randomly presented sounds. The subjects’ brains coped with the additional task by shifting responsibility from the hippocampus—which stores and recalls information—to the striatum, which takes care of rote, repetitive activities. Thanks to this switch, the subjects managed to sort the cards just as well with the musical distraction—but they had a much harder time remembering what, exactly, they’d been sorting once the experiment was over.

Even worse, certain studies find that multitasking boosts the level of stress-related hormones such as cortisol and adrenaline and wears down our systems through biochemical friction, prematurely aging us. In the short term, the confusion, fatigue, and chaos merely hamper our ability to focus and analyze, but in the long term, they may cause it to atrophy.

The next generation, presumably, is the hardest-hit. They’re the ones way out there on the cutting edge of the multitasking revolution, texting and instant messaging each other while they download music to their iPod and update their Facebook page and complete a homework assignment and keep an eye on the episode of The Hills flickering on a nearby television.