Drunken flies get hypersexual - and gay

Sound familiar? Reminds me of similar behaviors after University of Wisconsin football games, when drunken guys who could not find an appropriate female object would go ahead with what was available - other guys. This news item by Heidi Ledford in Nature describes experiments by Lee et al. that:

...tested the effects of chronic alcohol exposure on sexual behaviour in the fruitfly Drosophila melanogaster. The researchers noted that male flies repeatedly exposed to ethanol vapour became less discriminate in their mate selection. The buzzed flies often courted fellow males, pursuing them around the cage while serenading with a traditional fruitfly courtship song played on vibrating wings. 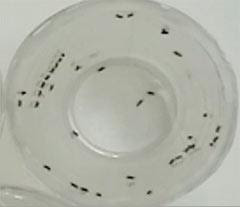 [Figure: Love Chain, male fruit flies chase each other in a circle] Eventually, the lusty flies devolve into a courting frenzy. “You get a chain of males chasing each other,” says Heberlein, who was not associated with the study but has observed similar behaviour in her own unpublished work. In contrast, alcohol had little effect on mating in female fruitflies, which normally do not court their mates.

The findings suggest that the flies do not fundamentally change their sexual orientation, but rather get over-sexed. “Multiple alcohol exposures makes them essentially hypersexual,” says Heberlein. The mind-dulling effects of alcohol might also make it more of a challenge for male fruitflies to distinguish the gender of other flies in the crowd.

Because of the genetic tools available, fruitflies might be a good model system for probing the idea, suggested for humans, that the neurotransmitter dopamine is a link between sex and alcohol.
Posted by Deric Bownds at 7:00 AM
Email ThisBlogThis!Share to TwitterShare to FacebookShare to Pinterest
Blog Categories: animal behavior, motivation/reward, sex