Alarms and Anxiety in 2008 - guaranteed 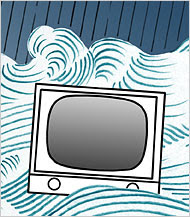 John Tierney does a very nice piece in the Jan 1 NY Times Science section describing how activists, journalists and publicity-savvy scientists (called availability entrepreneurs by social scientists) selectively monitor the globe looking for newsworthy evidence of a new form of sinfulness, burning fossil fuels. Some clips from his text:

A year ago, British meteorologists made headlines predicting that the buildup of greenhouse gases would help make 2007 the hottest year on record. At year’s end, even though the British scientists reported the global temperature average was not a new record — it was actually lower than any year since 2001 — the BBC confidently proclaimed, “2007 Data Confirms Warming Trend.”

When the Arctic sea ice last year hit the lowest level ever recorded by satellites, it was big news and heralded as a sign that the whole planet was warming. When the Antarctic sea ice last year reached the highest level ever recorded by satellites, it was pretty much ignored. A large part of Antarctica has been cooling recently, but most coverage of that continent has focused on one small part that has warmed.

When Hurricane Katrina flooded New Orleans in 2005, it was supposed to be a harbinger of the stormier world predicted by some climate modelers. When the next two hurricane seasons were fairly calm — by some measures, last season in the Northern Hemisphere was the calmest in three decades — the availability entrepreneurs changed the subject. Droughts in California and Australia became the new harbingers of climate change (never mind that a warmer planet is projected to have more, not less, precipitation over all).

The most charitable excuse for this bias in weather divination is that the entrepreneurs are trying to offset another bias. The planet has indeed gotten warmer, and it is projected to keep warming because of greenhouse emissions, but this process is too slow to make much impact on the public.

When judging risks, we often go wrong by using what’s called the availability heuristic: we gauge a danger according to how many examples of it are readily available in our minds. Thus we overestimate the odds of dying in a terrorist attack or a plane crash because we’ve seen such dramatic deaths so often on television; we underestimate the risks of dying from a stroke because we don’t have so many vivid images readily available.

Slow warming doesn’t make for memorable images on television or in people’s minds, so activists, journalists and scientists have looked to hurricanes, wild fires and starving polar bears instead. They have used these images to start an “availability cascade,” a term coined by Timur Kuran, a professor of economics and law at the University of Southern California, and Cass R. Sunstein, a law professor at the University of Chicago.

The availability cascade is a self-perpetuating process: the more attention a danger gets, the more worried people become, leading to more news coverage and more fear. Once the images of Sept. 11 made terrorism seem a major threat, the press and the police lavished attention on potential new attacks and supposed plots. After Three Mile Island and “The China Syndrome,” minor malfunctions at nuclear power plants suddenly became newsworthy.

...Once a cascade is under way, it becomes tough to sort out risks because experts become reluctant to dispute the popular wisdom, and are ignored if they do. Now that the melting Arctic has become the symbol of global warming, there’s not much interest in hearing other explanations of why the ice is melting — or why the globe’s other pole isn’t melting, too.

Posted by Deric Bownds at 6:00 AM
Email ThisBlogThis!Share to TwitterShare to FacebookShare to Pinterest
Blog Categories: culture/politics, psychology