The myth of the mid-life crisis. 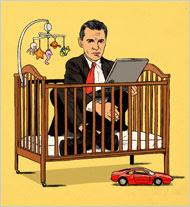 Here is an engaging article by Richard Freedman on the supposed crisis around age 50 (mainly in men) when the first signs of physical decline and the questions and doubts about one’s personal and professional accomplishments emerge.

..some find themselves seized by a seemingly irresistible impulse to do something dramatic, even foolish. Everything, it appears, is fair game for a midlife crisis: one’s job, spouse, lover — you name it.

a garden-variety case of a middle-aged narcissist grappling with the biggest insult he had ever faced: getting older...But you have to admit that “I’m having a midlife crisis” sounds a lot better than “I’m a narcissistic jerk having a meltdown.”

Another source of the midlife 'crisis' :

...reaching a situation...of having to seriously take account of someone else’s needs, such as those of children, for the first time.

Why do we have to label a common reaction of the male species to one of life’s challenges — the boredom of the routine — as a crisis? True, men are generally more novelty-seeking than women, but they certainly can decide what they do with their impulses.

The main culprit, I think, is our youth-obsessed culture, which makes a virtue of the relentless pursuit of self-renewal. The news media abound with stories of people who seek to recapture their youth simply by shedding their spouses, quitting their jobs or leaving their families. Who can resist?..Most middle-aged people, it turns out, if we are to believe the definitive survey...Except, of course, for the few — mainly men, it seems — who find the midlife crisis a socially acceptable shorthand for what you do when you suddenly wake up and discover that you’re not 20 anymore.

Posted by Deric Bownds at 6:30 AM
Email ThisBlogThis!Share to TwitterShare to FacebookShare to Pinterest
Blog Categories: culture/politics, human development, psychology