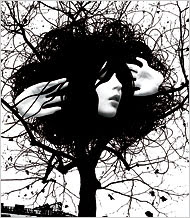 How do we feel about alternative versions of ourselves - lost possible selves, or the person we might have been? Benedict Carey writes a nice piece on this question. A few clips:

...Over the past decade and a half, psychologists have studied how regrets — large and small, recent and distant — affect people’s mental well-being. They have shown, convincingly though not surprisingly, that ruminating on paths not taken is an emotionally corrosive exercise. The common wisdom about regret — that what hurts the most is not what you did but what you didn’t do — also appears to be true, at least in the long run.

...those who are able to talk or write about this lost future without sinking into despair or losing hope tend to have developed another quality, called complexity...an ability to incorporate various points of view into a recollection, to vividly describe the circumstances, context and other dimensions...that this knack for self-evaluation develops over time; it is a learned ability.

...therapists have long known the value of seeing regretted choices in the context of what has been gained as well as lost.

...the perspective from which people remember slights or mistakes can affect the memories’ emotional impact... reimagining painful scenes from a third-person point of view, as if seeing oneself in a movie, blunts their emotional sting and facilitates ... clearheaded self-perception.

Posted by Deric Bownds at 5:45 AM
Email ThisBlogThis!Share to TwitterShare to FacebookShare to Pinterest
Blog Categories: psychology, self help