Please Clap, Talk or Shout at Any Time

Bernard Holland reviews Kenneth Hamilton's book, “After the Golden Age,” a detailed reflection on concert behavior in the 19th and early 20th centuries published recently by Oxford University Press. Fascinating bits of information about a bygone era before our current time, when

Concertgoers like you and me have become part police officer, part public offender. We prosecute the shuffled foot or rattled program, the errant whisper or misplaced cough. We tense at the end of a movement, fearful that one of the unwashed will begin to clap, bringing shame on us all. How serious we look, and how absurd we are.

A number of fascinating facts:

...the silence at a London performance of Liszt’s “Dante” Symphony represented not rapt attention but audience distaste.
...hardly anybody played more than one movement of a Beethoven sonata at a time.
...Audience participation was taken for granted in the 1840s. The pianist Alexander Dreyschock was criticized for playing “so loud that it made it difficult for the ladies to talk,”

...Concerts were different back then. Liszt could get away with the radical idea of “one man, one recital,” but musical events were usually variety shows in the manner of vaudeville. The star pianist or violinist was just an occasionally recurring act in a parade of singers, orchestra players, quartets and trios. When Liszt did his solo acts, there was none of the march-on, march-off stage ritual of today. Liszt greeted patrons at the door, mingled in the audience and schmoozed with friend and stranger alike. 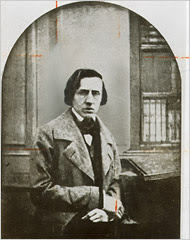 ..Whole recitals also took place between acts of an opera or movements of a symphony. When Chopin played his E minor Piano Concerto in Warsaw in 1830, other pieces were inserted between the first two movements. Perhaps the most celebrated such interruption was at the 1806 premiere of Beethoven’s Violin Concerto in Vienna, where the soloist thrilled listeners by playing his violin upside down and on one string.

Posted by Deric Bownds at 6:00 AM
Email ThisBlogThis!Share to TwitterShare to FacebookShare to Pinterest
Blog Categories: culture/politics, music