Exercise effects on brain and cognition 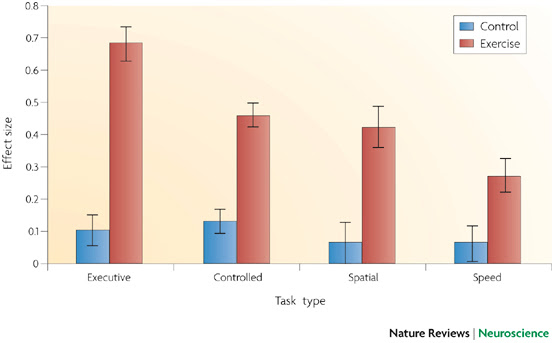 Physical activity has been found to enhance cognition, with a selectively larger effect on executive control functions compared with other cognitive processes. Accordingly, brain structures that mediate executive functions would be expected to show disproportionate changes as a result of participation in physical activity. One such structure is the anterior cingulate cortex (ACC), which is part of the brain's limbic system and has connections with multiple brain structures that process sensory, motor, emotional and cognitive information. Two convergent lines of research indicate that physical activity exerts a substantial influence on the ACC and the concomitant executive processes that it mediates.

Posted by Deric Bownds at 6:30 AM
Email ThisBlogThis!Share to TwitterShare to FacebookShare to Pinterest
Blog Categories: aging, brain plasticity, self help