Recent imaging studies have shown that seniors exhibit stronger brain activation than younger controls during the execution of various motor tasks. Old subjects activate the same regions as their younger counterparts, but to a larger extent, and they also activate additional regions that are not observed in the young subjects.

Heuninckx et al. examine the underlying neural mechanisms of this "overactivation" by determining whether it reflects compensation for various neural/behavioral deficits (e.g., neurodegeneration, attentional problems, reduction in sensory function, etc.) or whether it is due to de-differentiation (a generalized nonfunctional spread of activity attributable to deficits in neurotransmission, which in turn causes a decrease in the signal-to-noise ratio in neural firing and a loss of neural specialization). They compared brain activity in 24 older adults and 11 young controls during the performance of rhythmical hand–foot coordination tasks, whereby both limbs moved either in the same (iso-directional) or in the opposite (non-isodirectional, NONISODIR in the figure below) direction. Previous behavioral work had shown convincingly that the non-isodirectional pattern is more difficult and is produced with lower accuracy and stability than the iso-directional pattern. Activation in dedicated brain regions was correlated with motor performance in the elderly. According to the compensation hypothesis, the underlying rationale was that the over-activation would be larger in good than in poor motor performers, with the effect being more pronounced in more (non-isodirectional) than less (iso-directional) demanding coordination tasks. Conversely, the de-differentiation hypothesis assumed overactivation to be larger in poor than in successful motor performers because of nonfunctional neural irradiation. Thus, positive correlations between brain activation and motor performance were considered to reflect compensation, and negative correlations were considered to reflect de-differentiation.

They found that that coordination resulted in activation of classical motor coordination regions and also higher-level sensorimotor and frontal regions in the elderly. A positive correlation between activation level in these latter regions and motor performance was observed. This performance enhancing additional recruitment is consistent with the compensation hypothesis and reflects neuroplasticity at the systems level in the aging brain. 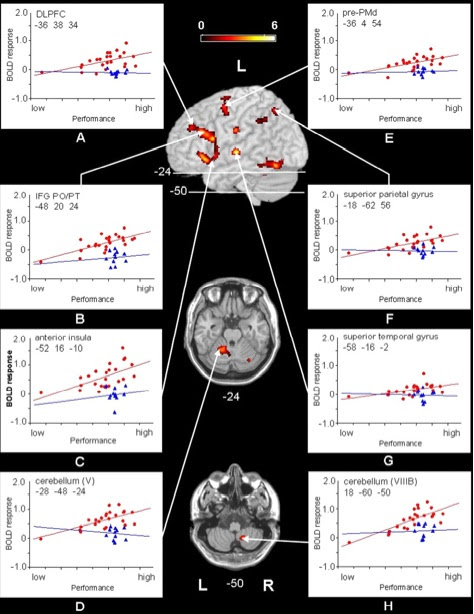 Figure: (Click to enlarge). Statistical parametric maps representing significantly larger activation in the old compared with the young group during the NONISODIR coordination mode, resulting from the following contrast: (NONISODIR – rest)old versus (NONISODIR – rest)young. L, Left hemisphere; R, right hemisphere. White arrows indicate brain regions that exhibit a significant correlation between brain activity level and coordination performance, as identified by a whole-brain multiple regression analysis. The graphics display each subject's BOLD response with respect to the within-cluster peak activation as a function of the inverse of the phase error (1/AE), with the younger subjects in blue and the older subjects in red.
Posted by Deric Bownds at 7:00 AM
Email ThisBlogThis!Share to TwitterShare to FacebookShare to Pinterest
Blog Categories: aging, brain plasticity