Clutter - more in the brain than in the house...

Parker-Pope offers a brief essay on the "clutter problem," suggesting that the problem in many cases is not a house problem but a person problem. 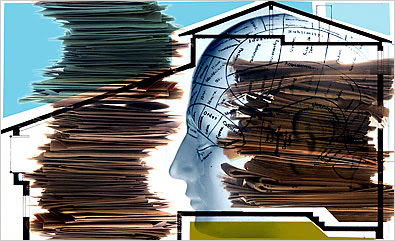 Excessive clutter and disorganization are often symptoms of a bigger health problem...At its most extreme, chronic disorganization is called hoarding...David F. Tolin, director of the anxiety disorders center at the Institute of Living in Hartford and an adjunct associate professor of psychiatry at Yale...recently studied compulsive hoarders using brain-scan technology. While in the scanner, hoarders looked at various possessions and made decisions about whether to keep them or throw them away. The items were shredded in front of them, so they knew the decision was irreversible. When a hoarder was making decisions about throwing away items, the researchers saw increased activity in the orbitofrontal cortex, a part of the brain involved in decision-making and planning...people who didn’t hoard showed no extra brain activity.

The article continues with a discussion of holding on to excess 'stuff' and being overweight. In several cases therapists have noted a correlation between reducing clutter and weight loss.
Posted by Deric Bownds at 6:00 AM
Email ThisBlogThis!Share to TwitterShare to FacebookShare to Pinterest
Blog Categories: psychology