This short piece by Marina Krakovsky from the NY Times:

People often display a remarkable ability to adapt to adversity, bouncing back to their usual levels of happiness despite extreme hardships. But people don’t always rebound, and scientists have long wondered what factors might account for the difference. In a talk at Harvard in September, a team of researchers suggested that one obstacle to emotional recovery, oddly enough, is hope — the belief that your current hardship is temporary.

From the beginning, the investigators suspected that hope might sometimes be counterproductive: prisoners with life sentences but with the possibility of parole adapt less well to prison life, for example, than prisoners with life sentences without the possibility of parole. But the researchers sought another empirical test. Their choice: Colostomy patients. The research team, led by Peter Ubel, a physician at the University of Michigan, tracked people who had portions of their colons removed or bypassed, such that the patients couldn’t defecate normally. The condition is extremely unpleasant and leads many people to say they’d rather be dead, Ubel reports. But a colostomy isn’t always permanent. Some patients are likely to heal and have their bowels reconnected. Whether your colostomy is permanent depends on your condition, but were it up to the patient to choose, “almost anybody would choose temporary over permanent,” Ubel says.

So it’s surprising that the permanent-colostomy patients ended up happier six months after the operation than the temporary group, whose members were still holding out hope. Patients with a temporary colostomy experienced a significant drop in life satisfaction versus patients in the permanent group. 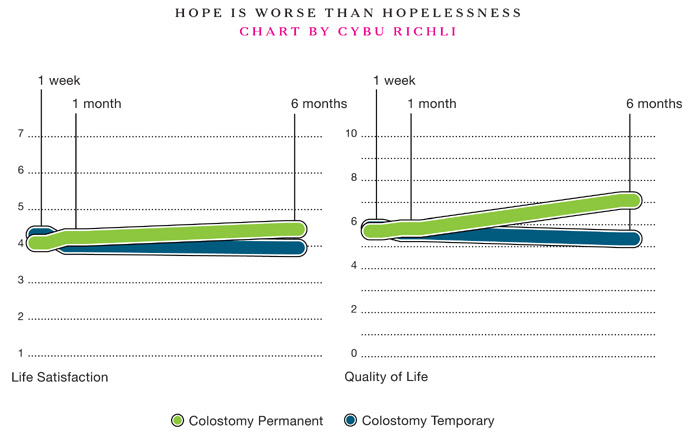 It might seem strange that patients who are better off objectively were less satisfied with their lives, yet the finding makes sense: “If your condition is temporary,” Ubel explains, “you’re thinking, I can’t wait until I get rid of this.” Ubel says thoughts like these keep you from moving on with your life and focusing on the many good things that remain.

Posted by Deric Bownds at 6:00 AM
Email ThisBlogThis!Share to TwitterShare to FacebookShare to Pinterest
Blog Categories: happiness, psychology