Does the internet liberate or enslave us?

A book by Lee Siegel "Against the Machine," reviewed by Janet Maslin in the NY Times, and an essay by Nicholas Carr raise a related set of arguments that challenge the assumption that the internet is a liberating force, a force for freedom, diffusing power and information among the many, rather than the few. At the same time web traffic in increasing, it is becoming more centralized. Carr notes:

-During the five years from 2002 through 2006, the number of Internet sites nearly doubled, yet the concentration of traffic at the ten most popular sites nonetheless grew substantially, from 31% to 40% of all page views
-Google continues to expand its hegemony...In March 2006, the company's search engine was used to process a whopping 58% of all searches in the United States, according to Hitwise. By November 2007, the figure had increased yet again, to 65%. The results of searches are also becoming more, not less, homogeneous. Do a search for any common subject, and you're almost guaranteed to find Wikipedia at or near the top of the list of results.
-Executives of Yahoo and Sun Microsystems have recently predicted that control over the net's computing infrastructure will ultimately lie in the hands of five or six organizations.
-To what end will the web giants deploy their power? They will, of course, seek to further their own commercial or political interests by monitoring, analyzing, and manipulating the behavior of "users." ...What's different, in comparison to the physical world, is that acts of control are more difficult to detect. 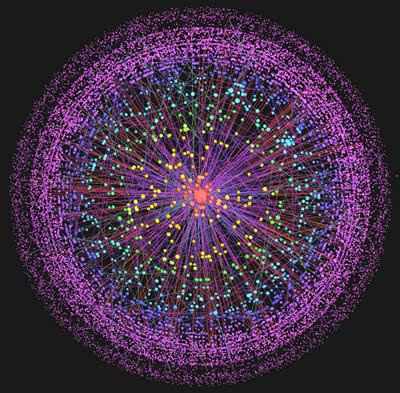 Graphical depiction of the Internet as consisting of a dense core of 80 or so critical nodes surrounded by an outer shell of 5,000 sparsely connected, isolated nodes that are very much dependent upon this core. (Shai Carmi, Bar Ilan University)

Siegel deals with socially toxic effects of the internet. From Maslin's review, describing Siegle's account of Starbucks, as one is:

...surrounded by Internet zombies, laptop-addicted creatures who have so grievously lost their capacity for human interaction “that social space has been contracted into isolated points of wanting, all locked into separate phases of inwardness.”...the semblance of a shared Starbucks experience masks endemic computer-generated isolation, a condition that has prompted psychic and ethical breakdowns that go well beyond the collapse of community....why we are living so gullibly through what would have been the plot of a science-fiction movie 15 years ago. Why does the freedom promised by the Internet feel so regimented and constricting? Why do its forms of democracy have their totalitarian side? What happens to popular culture when its sole emphasis is on popularity? How have we gone “from ‘I love that thing he does!’ to ‘Look at all those page views!’ in just a few years”?

Posted by Deric Bownds at 7:00 AM
Email ThisBlogThis!Share to TwitterShare to FacebookShare to Pinterest
Blog Categories: culture/politics, technology