I want to pass on this essay by Marcel Kinsbourne, which is an interesting exegesis of the implication of mirror neuron systems in our brain, especially with respect to possibly making moot the issue of brain versus environmental effects: 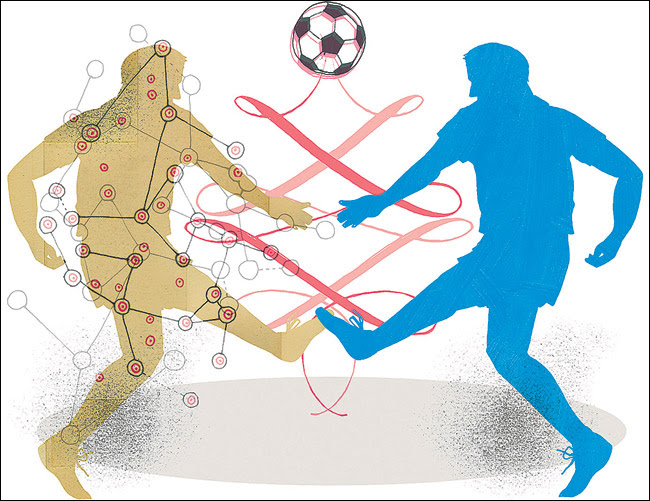 When the phenomenon of "mirror neurons" that fire both when a specific action is perceived and when it is intended was first reported, I was impressed by the research but skeptical about its significance...I have come to realize that mirror neurons are not only less than meets the eye but also more. Instead of being a specific specialization, they play their role as part of a fundamental design characteristic of the brain; that is, when percepts are activated, relevant intentions, memories and feelings automatically fall into place.

That an individual is likely to act in the same ways that others act is seen in the documented benefit for sports training of watching experts perform. "Emotional contagion" occurs when someone witnesses the emotional expressions of another person and therefore experiences that mood state oneself. People's viewpoints can subtly and unconsciously converge when their patterns of neural activation match, in the total absence of argument or attempts at persuasion. When people entrain with each other in gatherings, crowds, assemblies and mobs, diverse individual views reduce into a unified group viewpoint.

People's views are surreptitiously shaped by their experiences, and rationality comes limping after, downgraded to rationalization. Once opinions are established, they engender corresponding anticipations. People actively seek those experiences that corroborate their own self-serving expectations. This may be why as we grow older, we become ever more like ourselves. Insights become consolidated and biases reinforced when one only pays attention to confirming evidence. Diverse mutually contradictory "firm convictions" are the result.

If I am correct in my changed views as to what mirror neurons stand for and how representation routinely merges perception, action, memory and affect into dynamic reciprocal interaction, these views would have a bearing on currently disputed issues. Whether an effect is due to the brain or the environment would be moot if environmental causes indeed become brain causes, as the impressionable brain resonates with changing circumstances. What we experience contributes mightily to what we are and what we become.

What people experience indeed changes their brain, for better and for worse. In turn, the changed brain changes what is experienced. Regardless of its apparent stability over time, the brain is in constant flux, and constantly remodels. Heraclitus was right: "You shall not go down twice to the same river". The river will not be the same, but for that matter, neither will you. We are never the same person twice. The past is etched into the neural network, biasing what the brain is and does in the present. William Faulkner recognized this: "The past is never dead. In fact, it's not even past".

Posted by Deric Bownds at 7:00 AM
Email ThisBlogThis!Share to TwitterShare to FacebookShare to Pinterest
Blog Categories: mirror neurons, social cognition