Poetry in your genome?

Now that we are able to synthesize complete genomes for organisms, we can also write what we want in its individual genes. Andrew Pollack describes several such literary efforts: 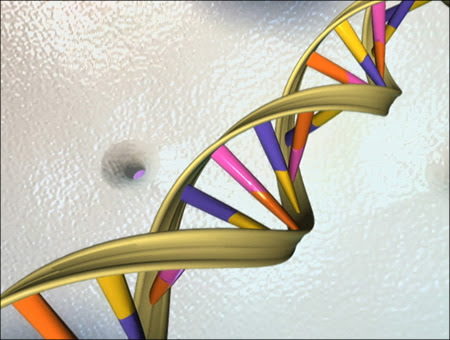 You were expecting poetry, perhaps? The secret messages hidden in J. Craig Venter’s synthetic bacterial genome have now been revealed. They are Dr. Venter’s name, and that of his research institute and co-workers....Dr. Venter announced last week in the journal Science that his team had become the first to synthesize the complete DNA of a bacterium. He revealed that the genome had five “watermarks,” sequences of genetic code that would spell words using the letters for the amino acids that would be produced by the DNA...Wired Science reported Monday that it had ferreted out the messages, with help from government scientists. One watermark said “VenterInstitvte,” using the unusual spelling because there is no amino acid represented by the letter “u.”...The other messages were CraigVenter, HamSmith, GlassandClyde and CindiandClyde for his co-authors Hamilton O. Smith, Clyde A. Hutchison III, John I. Glass and Cynthia Andrews-Pfannkoch. A Venter spokeswoman confirmed them...In 2003, scientists from Icon Genetics, a German biotechnology company, engineered the plant Arabidopsis thaliana to contain a line from Virgil’s “Georgics,” with the meaning “Neither can every soil bear every fruit.”

Posted by Deric Bownds at 6:30 AM
Email ThisBlogThis!Share to TwitterShare to FacebookShare to Pinterest
Blog Categories: genes, technology