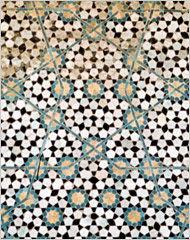 An interesting article on Migraines by Oliver Sachs in the Op-Extra section of The New York Times, focusing on the geometric hallucinations they so often evoke.

...when I first saw photographs of the Alhambra, with its intricate geometric mosaics, I started to wonder whether what I had taken to be a personal experience and resonance might in fact be part of a larger whole, whether certain basic forms of geometric art, going back for tens of thousands of years, might also reflect the external expression of universal experiences. Migraine-like patterns, so to speak, are seen not only in Islamic art, but in classical and medieval motifs, in Zapotec architecture, in the bark paintings of Aboriginal artists in Australia, in Acoma pottery, in Swazi basketry — in virtually every culture. There seems to have been, throughout human history, a need to externalize, to make art from, these internal experiences, from the decorative motifs of prehistoric cave paintings to the psychedelic art of the 1960s. Do the arabesques in our own minds, built into our own brain organization, provide us with our first intimations of geometry, of formal beauty?

Whether or not this is the case, there is an increasing feeling among neuroscientists that self-organizing activity in vast populations of visual neurons is a prerequisite of visual perception — that this is how seeing begins. Spontaneous self-organization is not restricted to living systems — one may see it equally in the formation of snow crystals, in the roilings and eddies of turbulent water, in certain oscillating chemical reactions. Here, too, self-organization can produce geometries and patterns in space and time, very similar to what one may see in a migraine aura. In this sense, the geometrical hallucinations of migraine allow us to experience in ourselves not only a universal of neural functioning, but a universal of nature itself.

Posted by Deric Bownds at 6:29 AM
Email ThisBlogThis!Share to TwitterShare to FacebookShare to Pinterest
Blog Categories: attention/perception