Dan Jones writes a news feature in Nature on neuroscientific and evolutionary perspectives on homicide, mainly carried out by men. Here are some selected chunks:

Men are not just more likely to kill other people than women are, they are also more likely to do so in groups ...Humans are not the only primates to form coalitions that kill members of neighbouring communities. ...five long-term study sites dotted around Africa have seen murderous 'gang violence' in chimpanzees...Wilson and Muller have compared death rates from conflict between 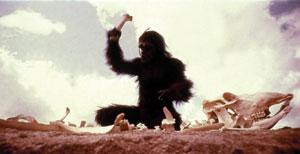 groups of chimps in the five long-term study sites with data for inter-group human conflicts in numerous subsistence-farmer and hunter–gatherer societies...Overall, humans and chimpanzees showed comparable levels of violent death from aggression between groups...however, chimps display within group aggression and killing behaviour 200 times more frequently that aboriginal human groups...this prosocial lack of violence looks like a fundamental aspect of human nature — the human ability to generate in-group amity often goes hand in hand with out-group enmity...Choi and Bowles have produced models in which altruism and war co-evolve, promoting conflict between groups and greater harmony within them.

A decline in inter-personal violence (as opposed to inter-group war) can be seen over the shorter timescale and narrower field of modern European history. Eisner has documented a trend of declining homicide rates estimated from historical records left by coroners, royal courts and other official sources spanning Europe from the twelfth century to the modern day. After rising from an average of 32 homicides per 100,000 people per year in the thirteenth and fourteenth centuries to 41 in the fifteenth, the murder rate has steadily dropped in every subsequent century, to 19, 11, 3.2, 2.6 and finally 1.4 in the twentieth century...a few centuries is too short a time for evolution to have shaped human nature much... A part of the answer that is consistent with an evolutionary approach is a long-term reduction in inequalities of life circumstances and prospects.