The algorithms of love... 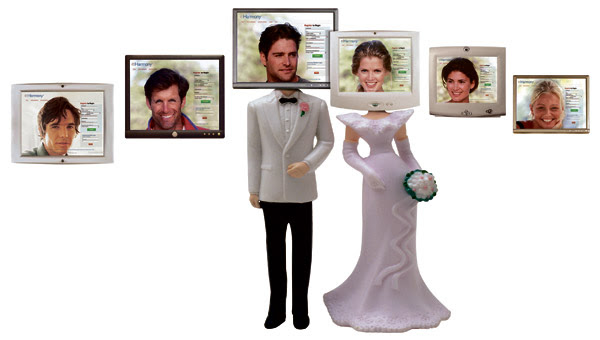 Online matchmaking has become a boom industry as rival scientists test their algorithms for finding love...The leading yenta is eHarmony, which pioneered the don’t-try-this-yourself approach eight years ago by refusing to let its online customers browse for their own dates. It requires them to answer a 258-question personality test and then picks potential partners...Another company, Perfectmatch.com, is using an algorithm designed by Pepper Schwartz, a sociologist at the University of Washington at Seattle. Match.com, which became the largest online dating service by letting people find their own partners, set up a new matchmaking service, Chemistry.com, using an algorithm created by Helen E. Fisher, an anthropologist at Rutgers who has studied the neural chemistry of people in love.

As the matchmakers compete for customers — and denigrate each other’s methodology — the battle has intrigued academic researchers who study the mating game. On the one hand, they are skeptical, because the algorithms and the results have not been published for peer review. But they also realize that these online companies give scientists a remarkable opportunity to gather enormous amounts of data and test their theories in the field. EHarmony says more than 19 million people have filled out its questionnaire...In the battle of the matchmakers, Chemistry.com has been running commercials faulting eHarmony for refusing to match gay couples (eHarmony says it can’t because its algorithm is based on data from heterosexuals), and eHarmony asked the Better Business Bureau to stop Chemistry.com from claiming its algorithm had been scientifically validated. The bureau concurred that there was not enough evidence, and Chemistry.com agreed to stop advertising that Dr. Fisher’s method was based on “the latest science of attraction.”

Dr. Fisher now says the ruling against her last year made sense because her algorithm at that time was still a work in progress as she correlated sociological and psychological measures, as well as indicators linked to chemical systems in the brain. But now, she said, she has the evidence from Chemistry.com users to validate the method, and she plans to publish it along with the details of the algorithm...“I believe in transparency,” she said, taking a dig at eHarmony. “I want to share my data so that I will get peer review.”

On reading that Chemistry.com didn't discriminate against gay match making, I naturally decided to give it a spin and went through their series of questions (including one on the relative lengths of one's index and ringer finger). It included psychological profile questions and some interesting tests of susceptibility to visual illusions. Alas, the list of prospective mates for a 65 yr. old retired professor was rather lean, and I ended my experiment by withdrawing my chemistry.com profile after one day.
Posted by Deric Bownds at 7:00 AM
Email ThisBlogThis!Share to TwitterShare to FacebookShare to Pinterest
Blog Categories: culture/politics, sex, technology