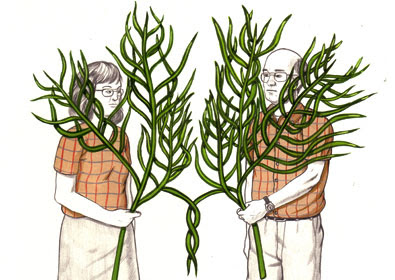 Benedict Cary mentions some interesting studies on social mimicry, persuasion, and affiliative behavior in an article from the NY Times science section. (Chapter 5 of my book has some stuff on this topic.) In one experiment he cites, the experimenter:

...had student participants go to a lab and give their opinions about a series of advertisements. A member of his research team mimicked half the participants while they spoke, roughly mirroring the posture and the position of their arms and legs, taking care not to be too obvious. Minutes later, the experimenter dropped six pens on the floor, making it look like an accident. In several versions of this simple sequence, participants who had been mimicked were two to three times as likely to pick up the pens as those who had not. The mimicry had not only increased good will toward the researcher within minutes, the study concluded, but it also prompted “an increased pro-social orientation in general.”

Another experiment tested how being mimicked might affect the behavior of a potential client or investor:

The team had 37 Duke students try out what was described as a new sports drink, Vigor, and answer a few questions about it. The interviewer mimicked about half the participants using a technique of mirroring a person’s posture and movements, with a one- to two-second delay. The idea is to be a mirror but a slow, imperfect one. Follow too closely, and most people catch it — and the game is over. None of the copied participants picked up on the mimicry. But by the end of the short interview, they were significantly more likely than the others to consume the new drink, to say they would buy it and to predict its success in the market. In a similar experiment, the psychologists found that this was especially true if the participants knew that the interviewer, the mimic, had a stake in the product’s success.

The article gives several other example of the subconscious social waltz, or kinesic communication, that underlies smooth human communication.
Posted by Deric Bownds at 8:35 AM
Email ThisBlogThis!Share to TwitterShare to FacebookShare to Pinterest
Blog Categories: social cognition