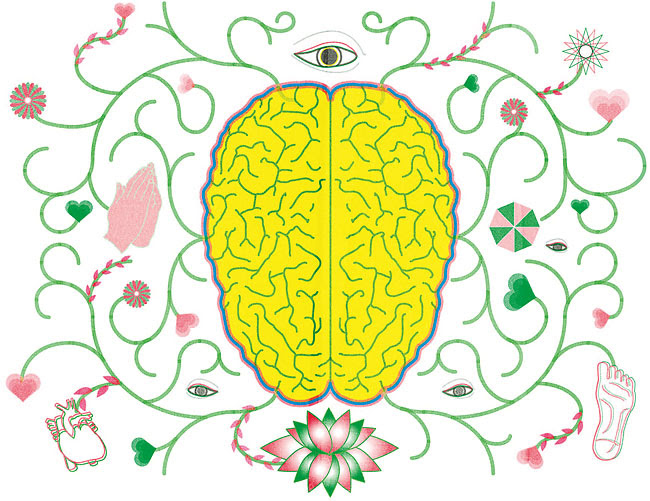 Jerome Groopman reviews Anne Harrington's new book "The Cure Within - A History of Mind-Body Medicine" in the NY Times Book review of Jan. 27. Harrington is professor and chair of the History of Science department at Harvard. Here is the final section of that review:

Harrington offers close observations of the interactions between the Harvard cardiologist Herbert Benson (and later the neuroscientist Richard Davidson of the University of Wisconsin) and the Dalai Lama and his Tibetan monks. She admits longing for scientific support for what is, in essence, an “Orientalist” conception, that the “Other” holds wisdom and therapeutic treasures beyond those imaginable to us in the West. Some of Harrington’s wish is fulfilled in the biology of the placebo response. Recent studies show that belief, even in inert treatments, can have profound benefits in relieving pain, likely via release of endorphins and other mediators in the brain. But despite several decades of concerted research in the field of psychoneuroimmunology, to my scrutiny no robust effects of meditation or other relaxation techniques that could combat illnesses like cancer or AIDS have been identified.

Harrington concludes with the questions that her students at Harvard regularly ask: Which mind-body narratives are “true”? Are all the stories we tell ourselves about illness equally valuable? Harrington has already answered these queries in part in the voice of the woman with breast cancer in the Stanford study. Yet, she has still been “haunted” over the years by unusual events, like the case of a man whose tumors seemed to melt “like snowballs on a hot stove” in response to a “worthlesss” cancer treatment that he nonetheless believed in. The physicist Freeman Dyson once noted that, to a scientist, an event like the spontaneous remission of a tumor is viewed as occurring at the asymptote of probability, one in several million, but through the eyes of a believer it becomes not mathematics but a miracle. Harrington shows us that, whatever science reveals about the cause and course of disease, we will continue to tell ourselves stories, and try to use our own metaphors to find meaning in randomness.

Posted by Deric Bownds at 7:00 AM
Email ThisBlogThis!Share to TwitterShare to FacebookShare to Pinterest
Blog Categories: emotion, fear/anxiety/stress, meditation, religion, self help