High-Functioning Autism: a neural phenotype in the cingulate cortex

A review by Chris and Uta Frith discusses and important paper in Neuron from Montague's group in Houston, who:

...have measured brain activity (using fMRI) while volunteers, who are classified as being at the high-functioning end of the autistic spectrum, were engaged in a simple social interaction. The task was an iterated trust game in which two subjects take turns as investor or trustee. The investor chooses how much to money to invest. This chosen amount is tripled on its way to the trustee, and the trustee then chooses how much to repay to the investor. Read Montague and his colleagues have studied this game extensively in large groups of volunteers and have observed a characteristic pattern of brain activity in the anterior cingulate cortex. When making an investment (self phase), transient increases in activity are seen in an area of mid cingulate cortex (−7 <>A graphic from the Chiu et al paper showing the diminished "self" response in autism spectrum patients: 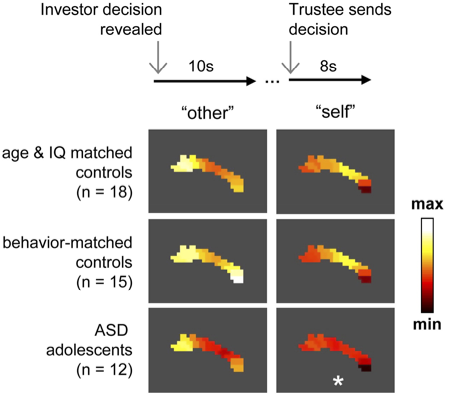 ...the results suggest that the abnormality associated with autism is restricted to only one phase of the interactive game: the point where the autistic volunteer makes an investment, not the point where the autistic volunteer is told about the repayment made by their partner. Additional results from Read Montague's group give further clues as to the implications of this result. First, the same pattern of activity in cingulate cortex is observed when volunteers are shown pictures of people engaged in athletic activities and asked to imagine themselves taking part. This is further evidence as to the nature of the cognitive process associated with this pattern of activity: it involves thinking about the self acting in a social context. Second, the characteristic patterns of activity in the cingulate cortex are only observed when the trust game is played with a human partner. No such distinct patterns emerge when the game is played in the absence of a responsive social partner...At least part of the imagining must involve thinking about how one would fit in with the group, and how other group members would evaluate one's performance. Actually, this is a question about the kind of reputation one might gain in the eyes of the others. Likewise, in the self phase of the trust game, the amount one invests can be seen as a measure of how much one trusts one's partner. It is not just giving an amount of money; it is giving a signal to the other person: “trust me” and “I trust you.” 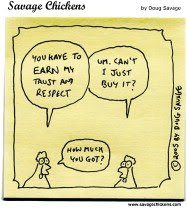 In other words, at the point of investment we are predicting what the effect of our investments is going to be on the behavior of our partners. In the other phase of the game, we are also evaluating a signal. But there is a difference. The evaluation is after the fact. We know what the investment is. We are not at this point trying to build our reputation in the other player's eyes.

Posted by Deric Bownds at 7:30 AM
Email ThisBlogThis!Share to TwitterShare to FacebookShare to Pinterest
Blog Categories: autism