The male chill-out after sex: role for brain oxytocin

Here is an intriguing account from Waldherr and Neumann: 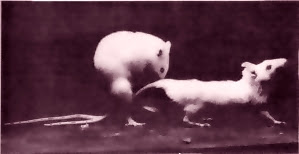 Sexual activity and mating are accompanied by a high level of arousal, whereas anecdotal and experimental evidence demonstrate that sedation and calmness are common phenomena in the postcoital period in humans. These remarkable behavioral consequences of sexual activity contribute to a general feeling of well being, but underlying neurobiological mechanisms are largely unknown. Here, we demonstrate that sexual activity and mating with a receptive female reduce the level of anxiety and increase risk-taking behavior in male rats for several hours. The neuropeptide oxytocin has been shown to exert multiple functions in male and female reproduction, and to play a key role in the regulation of emotionality after its peripheral and central release, respectively. In the present study, we reveal that oxytocin is released within the brain, specifically within the hypothalamic paraventricular nucleus, of male rats during mating with a receptive female. Furthermore, blockade of the activated brain oxytocin system by central administration of an oxytocin receptor antagonist immediately after mating prevents the anxiolytic effect of mating, while having no effect in nonmated males. These findings provide direct evidence for an essential role of an activated brain oxytocin system mediating the anxiolytic effect of mating in males.

Posted by Deric Bownds at 6:45 AM
Email ThisBlogThis!Share to TwitterShare to FacebookShare to Pinterest
Blog Categories: sex