A neural marker of consciousness

Here is the author's summary of an interesting article by Del Cul et al. in PlosBiology.

Understanding the neural mechanisms that distinguish between conscious and nonconscious processes is a crucial issue in cognitive neuroscience. In this study, we focused on the transition that causes a visual stimulus to cross the threshold to consciousness, i.e., visibility. We used a backward masking paradigm in which the visibility of a briefly presented stimulus (the “target”) is reduced by a second stimulus (the “mask”) presented shortly after this first stimulus. (Human participants report the visibility of the target.) When the delay between target and mask stimuli exceeds a threshold value, the masked stimulus becomes visible. Below this threshold, it remains nonvisible. During the task, we recorded electric brain activity from the scalp and reconstructed the cortical sources corresponding to this activity. Conscious perception of masked stimuli corresponded to activity in a broadly distributed fronto-parieto-temporal network, occurring from about 300 ms after stimulus presentation. We conclude that this late stage, which could be clearly separated from earlier neural events associated with subliminal processing and mask-target interactions, can be regarded as a marker of consciousness. 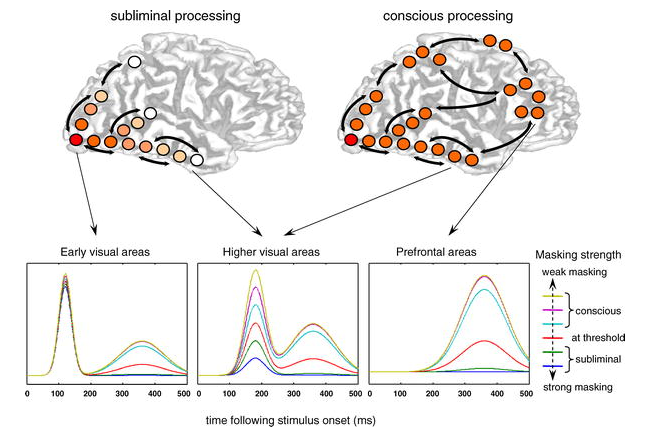 Posted by Deric Bownds at 11:00 AM
Email ThisBlogThis!Share to TwitterShare to FacebookShare to Pinterest
Blog Categories: attention/perception, consciousness