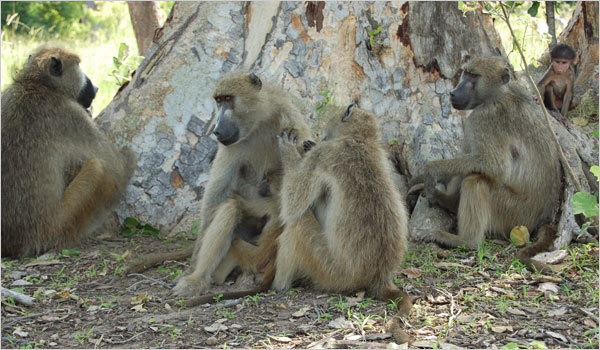 Nicholas Wade comments (PDF here) on the work of Cheney and Seyfarth, whose most recent book has the title of this post. They have carried out an ingenious series of experiments in the wild to probe how the baboon's mind keeps track of transient relationships:

Royal is a cantankerous old male baboon whose troop of some 80 members lives in the Moremi Game Reserve in Botswana. A perplexing event is about to disturb his day....From the bushes to his right, he hears a staccato whoop, the distinctive call that female baboons always make after mating. He recognizes the voice as that of Jackalberry, the current consort of Cassius, a male who outranks Royal in the strict hierarchy of male baboons. No hope of sex today....But then, surprisingly, he hears Cassius’s signature greeting grunt to his left. His puzzlement is plain on the video made of his reaction. You can almost see the wheels turn slowly in his head:...“Jackalberry here, but Cassius over there. Hmm, Jackalberry must be hooking up with some one else. But that means Cassius has left her unguarded. Say what — this is my big chance!”...The video shows him loping off in the direction of Jackalberry’s whoop. But all that he will find is the loudspeaker from which researchers have played Jackalberry’s recorded call.

Although Baboons excel at the skills required for maintaining social networks regulated by matrilineal lines and dominance hierarchies, there is no evidence that they attribute beliefs or ideas to other animals, or that 'they know that they know.' They provide an example of what sort of social and cognitive complexity is possible in the absence of language and a theory of mind.
Posted by Deric Bownds at 6:10 AM
Email ThisBlogThis!Share to TwitterShare to FacebookShare to Pinterest
Blog Categories: animal behavior, consciousness