Facts are no match for gossip... 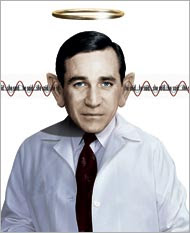 In yesterday's Science NY Times, John Tierny describes work by Ralf D. Sommerfeld and colleagues on human reciprocity that has a surprising result (PDF here). Here are some clips:

Language, according to the anthropologist Robin Dunbar, evolved because gossip is a more efficient version of the “social grooming” essential for animals to live in groups...Gossip also told people whom to trust, and the prospect of a bad reputation discouraged them from acting selfishly, so large groups could peacefully cooperate. At least, that was the theory: gossip promoted the “indirect reciprocity” that made human society possible.

To test it, researchers at the Max Planck Institute for Evolutionary Biology and the University of Vienna gave 10 Euros apiece to 126 students and had them play a game that put them in a dilemma. On each turn, the players would be paired off, and one of them was offered a chance to give 1.25 Euros to the other. If he agreed, the researchers added a bonus of .75 Euro so that the recipient ended up gaining 2 Euros...If the first player refused to give the money, he’d save 1.25 Euros, but if others found out about his miserliness they might later withhold money from him. As the game progressed, with the players changing partners frequently and alternating between the donor and recipient roles, the players were given information about their partners’ past decisions...Sometimes the donor was shown a record of what the partner had done previously while playing the donor role. The more generous this partner had earlier been toward other players, the more likely the donor was to give him something...Sometimes the donor was shown gossip about the partner from another player. When the partner was paid a compliment like “spendabler spieler!” — generous player! — the donor was more likely to give money. But the donor turned stingy when he saw gossip like “übler geizkragen” — nasty miser.

So far, so good. As predicted, gossip promoted indirect reciprocity. The research, published in the Proceedings of the National Academy of Sciences [Note, I haven't found this article yet in a PNAS search], showed that most people passed on accurate gossip and used it for the common good. They rewarded cooperative behavior even when they themselves weren’t directly affected by the behavior...If a cooperation game like this was played without consequences for the players’ reputations — as has been done in other experiments — most players would be miserly, and cooperation would collapse. In this experiment they were generous most of the time, and on average ended up with twice as much money as they had at the beginning of the game.

But here’s the disconcerting news from the experiment. In a couple of rounds, each donor was given both hard facts and gossip. He was given a record of how his partner had behaved previously as well as some gossip — positive gossip in one round, negative in another...The donor was told that the source of the gossip didn’t have any extra information beyond what the donor could already see for himself. Yet the gossip, whether positive or negative, still had a big influence on the donors’ decisions, and it didn’t even matter if the source of the gossip had a good reputation himself. On average, cooperation increased by about 20 percent if the gossip was good, and fell by 20 percent if the gossip was negative.

It could be,” Sommerfeld suggested, “that we are just more adapted to listen to other information than to observe people, because most of the time we’re not able to observe how other people are behaving. Thus we might believe we have missed something."