A slightly edited "Editor's Summary" from the Oct. 11 Nature:

As a language evolves, grammatical rules emerge and exceptions die out. Lieberman et al. have calculated the rate at which a language grows more regular, based on 1,200 years of English usage. Of 177 irregular verbs, 79 became regular in the last millennium. And the trend follows a simple rule: a verb's half-life scales as the square root of its frequency. Irregular verbs that are 100 times as rare regularize 10 times faster. The emergence of a rule (such as adding –ed for the past tense) spells death for exceptional forms...In a separate study, Pagel et al. looked at changing word meanings. Across the Indo-European languages, words like 'tail' or 'bird' evolve rapidly and are expressed by many unrelated words. Others, like 'two', are expressed by closely related word forms across the whole language family. Data from over 80 modern languages show that the more a word is used, the less it changes.

And, from Fitch's review of the two papers: 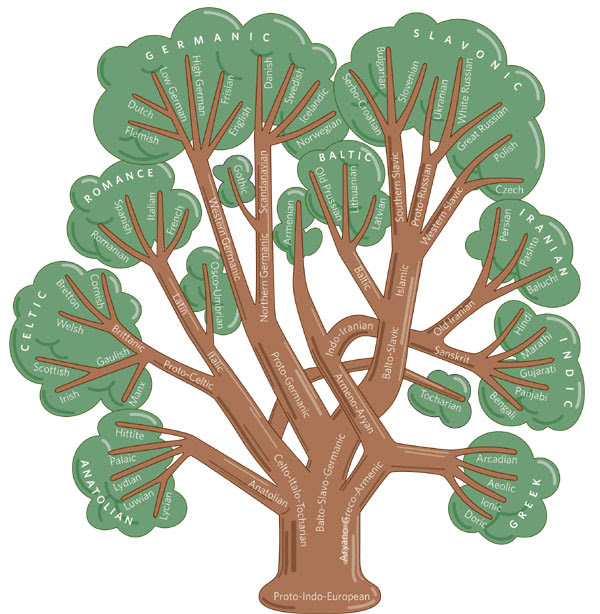 The words of language are not inherited biologically, but are passed on culturally through learning. This process of 'cultural evolution' generates a hierarchical tree of relationships among languages, here illustrated by the Indo-European family. Just as descent with modification in biological evolution (phylogeny) leads to phylogenetic trees, so the analogous process in language change (glossogeny) can lead to glossogenetic trees.

Where should we look to gain a deeper understanding of the invisible hand in the cultural evolution of language? A promising future direction is provided by recent attempts to fuse theoretical models of cultural evolution to experimental investigations of social learning in the laboratory. Experimental investigations of 'iterated learning' — similar to the game of Chinese whispers, where one participant's output serves as input for the next — can provide empirical data to inspire, and constrain, our theories. Sophisticated new theoretical models enable language-learning 'agents' to have both innate biases (in the form of so-called bayesian priors) and powerful statistical learning systems capable of discovering and using environmental regularities. Such models demonstrate the possibility of a very indirect and sometimes non-intuitive relationship between the regularities emerging at the level of a whole population and the underlying generating forces. These forces are individual behaviour and learning (social usage) and innate constraints (in Chomsky's terms, a 'language acquisition device', often called universal grammar).

..some of the most persistent 'cultural replicators' — memes — evolve as slowly as some genes. By documenting and quantifying such effects, this work opens the door to a diverse range of theoretical and empirical investigations. If there is ever to be a science of memetics o rival that of genetics, it should proceed along these lines: combining careful quantitative analysis of well-documented linguistic changes with sophisticated theoretical models capable of taking into account the multilayered complexity of cultural evolution.

Posted by Deric Bownds at 7:00 AM
Email ThisBlogThis!Share to TwitterShare to FacebookShare to Pinterest
Blog Categories: human evolution, language