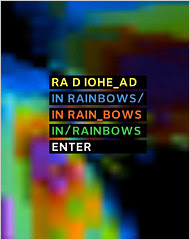 An article in the Arts section of today's NY Times temporarily stirred me out of my curmudgeonly old fart persona. Just as a federal jury in Minnesota last week decided that a mother found liable for copyright infringement for sharing music online should pay damages amounting to about $9,250 apiece for 24 songs, the British Rock group Radiohead has made their latest album "In Rainbows" available for download, letting their fans decide how much they want to pay for it. This has brought a new climax in the pricing pandemonium in the on-line music industry summed up by Radiohead manager Bryce Edge:

Digital technology has reintroduced the age of the troubadour. You are worth what people are prepared to give you in the digital age because they can get it for nothing.

In another departure from convention:

...the band declined to send out early copies of the music for reviewers and has not settled on a traditional single to push to radio stations. As a result, programmers are improvising. In San Francisco, for instance, the rock station KITS-FM, Live 105, has the entire album on its Web site (live105.com) and will let fans vote to determine which songs merit airplay.

I just checked out this site, and proceeded to buy and download the new album.
Posted by Deric Bownds at 9:41 AM
Email ThisBlogThis!Share to TwitterShare to FacebookShare to Pinterest
Blog Categories: culture/politics, music