Individuals with autism spectrum conditions (ASC) have profound impairments in the interpersonal social domain, but it is unclear if individuals with ASC also have impairments in the intrapersonal self-referential domain. Lombardo et. al. give an interesting introductory discussion of the "absent self" model of Frith. They then evaluate performance of 30 subjects and:

"conclude that individuals with ASC have broad impairments in both self-referential cognition and empathy. These two domains are also intrinsically linked and support predictions made by simulation theory. Our results also highlight a specific dysfunction in ASC within cortical midlines structures of the brain such as the medial prefrontal cortex." 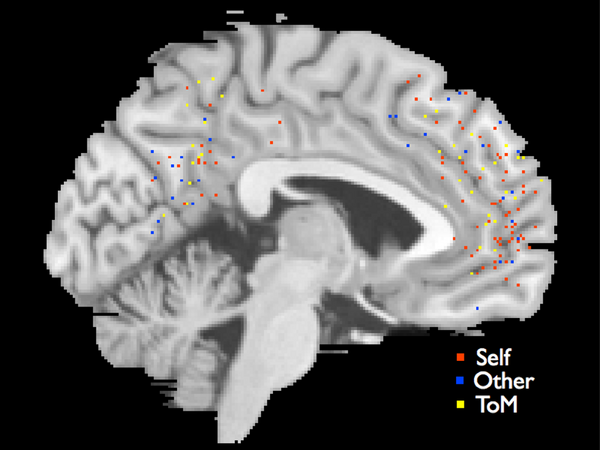 Boundaries are 16mm from within midline. All peaks are taken from exemplary studies in the literature. Brain is depicted on a representative sagittal slice of the Montreal Neurological Institute (MNI) template

Posted by Deric Bownds at 6:10 AM
Email ThisBlogThis!Share to TwitterShare to FacebookShare to Pinterest
Blog Categories: autism, self