Jon Kleinberg, best known for his work on web searching that paved the way for Google and the rest, writes on the threat posed by computer viruses and worms in our increasingly 'wireless' age, concluding that biological models of virus transmission are increasingly relevant for assessing the emerging threat. Here are a few clips: 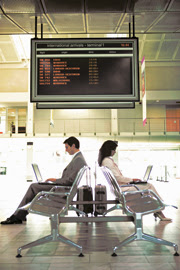 Traditionally, computer viruses have propagated on networks that bear little resemblance to the networks of physical contact through which their biological counterparts spread. But a growing body of research shows that the increasing use of short-range wireless communication networks might cause the two models to converge....Diseases in plant populations, or animal diseases such as rabies, are heavily constrained by geographical proximity and the relatively fixed physical locations of the infected individuals. Models of these diseases have been extended using detailed data on patterns of travel within cities and by air worldwide in attempts to analyse disease outbreaks in human populations...Epidemics on the Internet are even more diverse. At the most general level, there is a distinction between computer viruses, which 'piggyback' on data exchanged between users, and computer worms, which more actively direct their own transmission through a network...

Very roughly.. one could view models of biological epidemics as rooted in spatial networks, and expanding into less spatial realms to model the technologies that have accelerated human travel. Meanwhile, research on cyber-epidemics has occupied the non-spatial end of the spectrum, with its diverse and far-flung connections, when modelling global communication technologies such as the Internet.

..the spread of short-range wireless communication technologies such as Bluetooth, and the emergence of worms that exploit these systems is disrupting this dichotomy by making possible computer-virus outbreaks whose progress closely tracks human mobility patterns. These types of wireless worm are designed to infect mobile devices such as cell phones, and then to continuously scan for other devices within a few tens of metres or less, looking for new targets. A computer virus thus becomes something you catch not necessarily from a compromised computer halfway around the world, but possibly from the person sitting next to you on a bus, or at a nearby table in a restaurant.

In assessing the risks of such attacks, and developing countermeasures against them, it is intriguing to contemplate how we might draw on expertise from the field of human epidemiology in understanding how contagion spreads...Analogies to biological epidemics can also be exploited for beneficial purposes, in the design of computer-network protocols. For mobile devices, epidemiology helps in dealing with the problem of intermittent connectivity: that the routing of traffic must conform to a dynamic and unpredictable network structure as the owners of mobile devices move around. The result is a growing interest in opportunistic routing, in which messages are passed between devices that come into physical proximity, with the goal of eventually reaching a specified recipient. The development of such protocols has drawn on detailed data concerning human mobility and contact patterns.

Posted by Deric Bownds at 6:15 AM
Email ThisBlogThis!Share to TwitterShare to FacebookShare to Pinterest
Blog Categories: culture/politics, technology