Oscar, the cat of doom

I'm a cat person, so was attracted to this crazy story in the July 26 issue of the New England Journal of Medicine: "A day in the life of Oscar the cat." It describes the cat's daily rounds in a New England rest home. 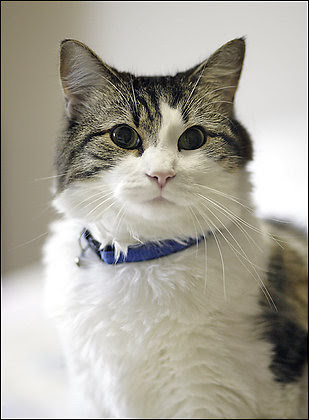 Since he was adopted by staff members as a kitten, Oscar the Cat has had an uncanny ability to predict when residents are about to die. Thus far, he has presided over the deaths of more than 25 residents on the third floor of Steere House Nursing and Rehabilitation Center in Providence, Rhode Island. His mere presence at the bedside is viewed by physicians and nursing home staff as an almost absolute indicator of impending death, allowing staff members to adequately notify families. Oscar has also provided companionship to those who would otherwise have died alone. For his work, he is highly regarded by the physicians and staff at Steere House and by the families of the residents whom he serves.

Posted by Deric Bownds at 6:40 AM
Email ThisBlogThis!Share to TwitterShare to FacebookShare to Pinterest
Blog Categories: aging, animal behavior, culture/politics