An awakening - recovery from coma by deep brain stimulation

You may well have seen accounts on this work in the press, but I thought I would excerpt from a description by Shadlen and Kiani that discusses possible underlying mechanisms of the case - in which stimulation of the thalamus of a man in a coma for six years after an accident restored consciousness.

A key component is the thalamus, which lies between the brainstem and the cerebral hemispheres, and forms the gateway to the brain's cortex. The thalamus is organized as a set of nuclei. The best understood of these nuclei are those containing the neurons that relay information from the eyes, ears and skin to the appropriate sensory cortex. But much of the thalamus is poorly understood. Anatomical studies in non-human primates have identified a class of thalamic neuron that might operate more generally in activating cortical networks6. These neurons, which stain positively for the calcium-binding protein calbindin, are found in all thalamic nuclei. Although we know little about the physiological properties of these calbindin-positive cells, they tend to exhibit a different pattern of connections with the cortex compared with the relay cells. Their axons terminate more broadly both across cortical areas and in layers that the relay cells miss. These calbindin-positive cells comprise a large percentage of the intralaminar nuclei of the thalamus — nuclei that have long been thought to have a role in arousal. 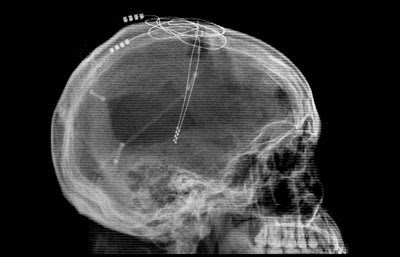 Schiff et al. hypothesized that their patient might express a minimal level of consciousness because of a primary impairment of the arousal system itself. The patient had suffered irreparable damage to much of the cerebral cortex, but many essential areas were preserved. By stimulating the intralaminar nuclei, the authors hoped to switch on the undamaged areas of cortex...The results were dramatic. Within 48 hours of the surgery to place the electrodes, the patient, who had remained in a minimally conscious state for 6 years, demonstrated increased arousal and sustained eye-opening, as well as rapid bilateral head-turning to voices.

The original article and the review then describe further recovery during a regime of varying patterns of brain stimulation. And here is an interesting summary of possible implications of this work:

...the observations ... may provide clues about the neurobiological underpinnings of consciousness. Cognitive neuroscience is beginning to expose the architecture of information processing that is directed towards goals and actions; we refer to this as an 'intentional framework', but it flies under various banners, including 'affordances' and 'embodied cognition...In essence, the brain does not process information in the abstract but instead consults information acquired through the senses and in memory insofar as it bears on the decisions made about potential actions and strategies. Our brains allow us to decide among possible options — that is, how and in what context to engage with the world around us. The brain makes many such decisions unconsciously. Indeed, the decision to engage at all is, in effect, an unconscious decision to be conscious. Thus, the brain of the sleeping mother queries the environment for the cry of her newborn. We suspect that the normal unconscious brain monitors the environment for cues that prompt it to decide whether to awaken and engage. This mechanism may be disrupted in various disorders of consciousness, including the minimally conscious state, hypersomnolence, concussion, abulia (lack of will) and possibly severe depression.

Previous theories of consciousness have relied on a central executive and magical physiological phenomena (for example, synchronized reverberations) to elevate the subconscious functions of the brain to consciousness. However, viewed as a decision to engage, consciousness can instead be studied in the same framework as other types of decision and the allocation of attention11. Rather than a central executive, there seems to be a network of brain regions that organize the resting state and maintain overall orientation towards context. It is quite possible that they make decisions about whether or not to engage and in what way. They do what Sartre considered impossible: they choose whether to choose or not.

Posted by Deric Bownds at 6:30 AM
Email ThisBlogThis!Share to TwitterShare to FacebookShare to Pinterest
Blog Categories: consciousness