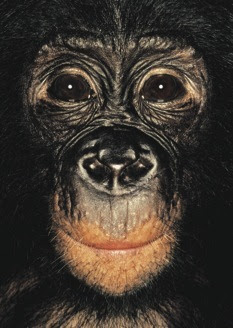 The July 30 issue of "The New Yorker" has an engaging article by Ian Parker on bonobo apes, meant to be much nicer than chimpanzees, and perhaps the modern species most close to the evolutionary precursor of humans. Here are some clips from that article (PDF here).

In recent years, the bonobo has found a strange niche in the popular imagination, based largely on its reputation for peacefulness and promiscuity...This pop image of the bonobo—equal parts dolphin, Dalai Lama, and Warren Beatty—has flourished largely in the absence of the animal itself, which was recognized as a species less than a century ago. Two hundred or so bonobos are kept in captivity around the world.. It is one of the oddities of the bonobo world—and a source of frustration to some—that Frans de Waal, of Emory University, the high-profile Dutch primatologist and writer, who is the most frequently quoted authority on the species, has never seen a wild bonobo.

The article describes the field work of Gottfried Hohmann and his assistants, studying bonobo behavior in the wild. It turns out that a less flattering description of the species emerges. Aggression and infanticide have been observed, although not as prominently displayed as in Chimpanzees.

“It was so easy for Frans to charm everyone,” Hohmann said of de Waal one afternoon. “He had the big stories. We don’t have the big stories. Often, we have to say, ‘No, bonobos can be terribly boring. Watch a bonobo and there are days when you don’t see anything—just sleeping and eating and defecating. There’s no sex, there’s no food-sharing.’ ” During our first days in camp, the bonobos had been elusive. “Right now, bonobos are not vocalizing,” Hohmann said. “They’re just there. And if you go to a zoo, if you give them some food, there’s a frenzy. It’s so different.”...Captivity can have a striking impact on animal behavior. As Craig Stanford, a primatologist at the University of Southern California, recently put it, “Stuck together, bored out of their minds—what is there to do except eat and have sex?”

The media still regularly ask Frans de Waal about bonobos; and he still uses the species as a stick to beat what he scorns as “veneer theory”—the thought that human morality is no more than a veneer of restraint laid over a vicious, animal core. Some of his colleagues in primatology admit to impatience with his position—and with the broader bonobo cult that flattens a complex animal into a caricature of Edenic good humor. “Frans has got all the best intentions, in all sorts of ways, but there is this sense in which this polarizing of chimps and bonobos can be taken too far,” Richard Wrangham said. Hohmann concurred: “There are certainly some points where we are in agreement; and there are other points where I say, ‘No, Frans, you should go to Lomako or Lui Kotal, and watch bonobos, and then you’d know better.’ ” He went on, “Frans enjoyed the luxury of being able to say field work is senseless. When you see wild bonobos, some things that he has emphasized and stretched are much more modest; the sex stuff, for example. But other things are even more spectacular. He hasn’t seen meat-sharing, he has never seen hunting.”

Because of Hohmann’s disdain for premature theories, and his data-collecting earnestness, it had sometimes been possible to forget that he is still driving toward an eventual glimpse of the big picture—and that this picture includes human beings. Humans, chimpanzees, and bonobos share a common ancestor. Was this creature bonobo-like, as Hohmann suspects? Did the ancestral forest environment select for male docility, and did Homo and the chimpanzee then both dump that behavior, independently, as they evolved in less bountiful environments? The modern bonobo holds the answer, Hohmann said; in time, its behavior will start to illuminate such characteristics as relationships between men and women, the purpose of aggression, and the costs and benefits of male bonding.