The Politics of God 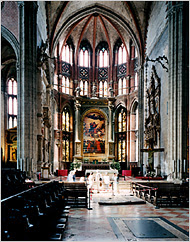 Mark Lilla, Professor of the humanities at Columbia Univ., has generated an essay (adapted from his book "The Stillborn God: Religion, Politics and the Modern West") which appeared in the The New York Times Magazine of Aug. 19. It is beautifully written, focusing on Western political and religious history, and its interactions with Islam. I offer a few clips here:

The twilight of the idols has been postponed. For more than two centuries, from the American and French Revolutions to the collapse of Soviet Communism, world politics revolved around eminently political problems. War and revolution, class and social justice, race and national identity — these were the questions that divided us. Today, we have progressed to the point where our problems again resemble those of the 16th century, as we find ourselves entangled in conflicts over competing revelations, dogmatic purity and divine duty. We in the West are disturbed and confused. Though we have our own fundamentalists, we find it incomprehensible that theological ideas still stir up messianic passions, leaving societies in ruin. We had assumed this was no longer possible, that human beings had learned to separate religious questions from political ones, that fanaticism was dead. We were wrong.

The revival of political theology in the modern West is a humbling story. It reminds us that this way of thinking is not the preserve of any one culture or religion, nor does it belong solely to the past. It is an age-old habit of mind that can be reacquired by anyone who begins looking to the divine nexus of God, man and world to reveal the legitimate political order. This story also reminds us how political theology can be adapted to circumstances and reassert itself, even in the face of seemingly irresistible forces like modernization, secularization and democratization. Rousseau was on to something: we seem to be theotropic creatures, yearning to connect our mundane lives, in some way, to the beyond. That urge can be suppressed, new habits learned, but the challenge of political theology will never fully disappear so long as the urge to connect survives. 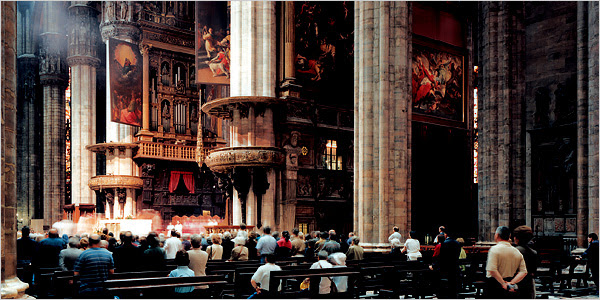 So we are heirs to the Great Separation only if we wish to be, if we make a conscious effort to separate basic principles of political legitimacy from divine revelation. Yet more is required still. Since the challenge of political theology is enduring, we need to remain aware of its logic and the threat it poses. This means vigilance, but even more it means self-awareness. We must never forget that there was nothing historically inevitable about our Great Separation, that it was and remains an experiment. In Europe, the political ambiguities of one religion, Christianity, happened to set off a political crisis that might have been avoided but wasn’t, triggering the Wars of Religion; the resulting carnage made European thinkers more receptive to Hobbes’s heretical ideas about religious psychology and the political implications he drew from them; and over time those political ideas were liberalized. Even then, it was only after the Second World War that the principles of modern liberal democracy became fully rooted in continental Europe.

As for the American experience, it is utterly exceptional: there is no other fully developed industrial society with a population so committed to its faiths (and such exotic ones), while being equally committed to the Great Separation. Our political rhetoric, which owes much to the Protestant sectarians of the 17th century, vibrates with messianic energy, and it is only thanks to a strong constitutional structure and various lucky breaks that political theology has never seriously challenged the basic legitimacy of our institutions. Americans have potentially explosive religious differences over abortion, prayer in schools, censorship, euthanasia, biological research and countless other issues, yet they generally settle them within the bounds of the Constitution. It’s a miracle.

...a number of Muslim thinkers around the world have taken to promoting a “liberal” Islam. What they mean is an Islam more adapted to the demands of modern life, kinder in its treatment of women and children, more tolerant of other faiths, more open to dissent. These are brave people who have often suffered for their efforts, in prison or exile, as did their predecessors in the 19th century, of which there were many. But now as then, their efforts have been swept away by deeper theological currents they cannot master and perhaps do not even understand. The history of Protestant and Jewish liberal theology reveals the problem: the more a biblical faith is trimmed to fit the demands of the moment, the fewer reasons it gives believers for holding on to that faith in troubled times, when self-appointed guardians of theological purity offer more radical hope. Worse still, when such a faith is used to bestow theological sanctification on a single form of political life — even an attractive one like liberal democracy — the more it will be seen as collaborating with injustice when that political system fails. The dynamics of political theology seem to dictate that when liberalizing reformers try to conform to the present, they inspire a countervailing and far more passionate longing for redemption in the messianic future. That is what happened in Weimar Germany and is happening again in contemporary Islam.

In the end, though, what happens on the opposite shore will not be up to us. We have little reason to expect societies in the grip of a powerful political theology to follow our unusual path, which was opened up by a unique crisis within Christian civilization. This does not mean that those societies necessarily lack the wherewithal to create a decent and workable political order; it does mean that they will have to find the theological resources within their own traditions to make it happen.

Our challenge is different. We have made a choice that is at once simpler and harder: we have chosen to limit our politics to protecting individuals from the worst harms they can inflict on one another, to securing fundamental liberties and providing for their basic welfare, while leaving their spiritual destinies in their own hands. We have wagered that it is wiser to beware the forces unleashed by the Bible’s messianic promise than to try exploiting them for the public good. We have chosen to keep our politics unilluminated by divine revelation. All we have is our own lucidity, which we must train on a world where faith still inflames the minds of men.

Posted by Deric Bownds at 6:50 AM
Email ThisBlogThis!Share to TwitterShare to FacebookShare to Pinterest
Blog Categories: culture/politics, religion