Flipping switches in the brain with light.

The Aug. 14 science section of the NYTimes (PDF here) notes a technique which I mentioned in a previous post: making brain cells susceptible to light activation by inserting a light sensitive ion channel in their membranes.

A first step is establishing that it is possible to tweak a brain circuit by remote control and observe the corresponding behavioral changes in freely moving lab animals. On a recent Sunday at Stanford, Dr. Deisseroth and Feng Zhang, a graduate student, hovered over a dark brown mouse placed inside a white plastic tub. Through standard gene-manipulating tricks, the rodent had been engineered to produce channelrhodopsin only in one particular kind of neuron found throughout the brain, to no apparent ill effect....Mr. Zhang had implanted a tiny metal tube into the right side of the mouse’s partly shaved head...Now he carefully threaded a translucent fiber-optic cable not much wider than a thick human hair into that tube, positioned over the area of the cerebral cortex that controls movement...(then).. adjusted a key on a nearby laser controller box, and the fiber-optic cable glowed with blue light. The mouse started skittering in a left-hand spin, like a dog chasing its tail....“Turn it off, and then you can see him stand up,” Dr. Deisseroth continued. “And now turn it back on, and you can see it’s circling.”..Because the brain lacks pain receptors, the mouse felt no discomfort from the fiber optic, the scientists said, although it looked a tad confused. Scientists have long known that using electrodes to gently zap one side of a mouse’s motor cortex will make it turn the opposite way. What is new here is that for the first time, researchers can perturb specific neuron types using light..... 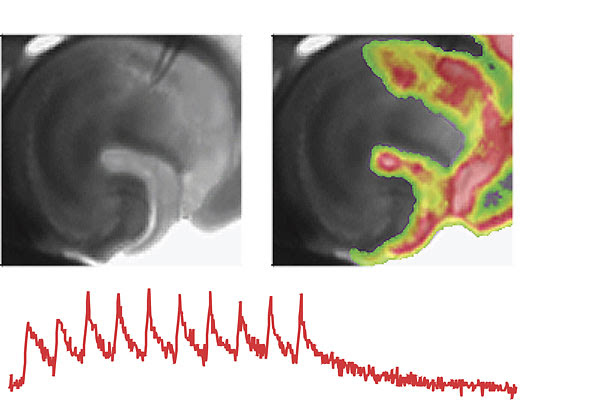 Legend: Light stimulation every 200 milliseconds generates electrical activity, right, in an area of the brain associated with depression.

At Stanford, Dr. Deisseroth’s group has identified part of a brain circuit, in the hippocampus, that is underactive in rats, with some symptoms resembling depression. The neural circuit’s activity — and the animals’ — perked up after antidepressant treatment, in findings reported last week in the journal Science. Now the team is examining whether they can lift the rats’ low-energy behavior by using channelrhodopsin to rev up the sluggish neural zone...

The Stanford group has sent DNA copies of the “on” and “off” light-switch genes to more than 175 researchers eager to try them in all stripes of electrically excitable cells, from insulin-releasing pancreas cells to heart cells.

Posted by Deric Bownds at 6:35 AM
Email ThisBlogThis!Share to TwitterShare to FacebookShare to Pinterest
Blog Categories: acting/choosing, technology