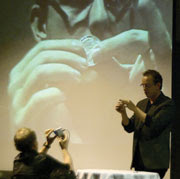 At the recent meeting of the Association for the Scientific Study of Consciousness that I attended in Las Vegas, one of most interesting sessions featured well known magicians. I was going to write this up, but here is a better job than I would do in a description of the session written by Martinez-Conde and Macknik (co-chairs of the meeting) in the July 26 issue of Nature Magazine:
Cognitive scientists take a lesson from magicians.

Teller, the mute half of the magician duo Penn & Teller, apparently pulls a coin out of thin air for the umpteenth time. The audience breaks into applause. It's another great performance in Las Vegas, Nevada — only tonight, Teller is part of a special symposium hosted by the Association for the Scientific Study of Consciousness, bringing together magicians and cognitive scientists.

Vision scientists have often turned to the visual arts to rediscover the principles underlying visual perception, such as how to convey the illusion of depth on a flat canvas. Similarly, cognitive scientists have much to learn from magicians, who have developed cognitive principles and illusions that trick audiences.

The Magic of Consciousness Symposium on 24 June attempted to plumb directly the depths of the intuition of world-class magicians. Magicians are behaviour experts who artfully manipulate attention and awareness. Their wealth of knowledge on cognition and behaviour is now ripe for picking.

James Randi — aka The Amaz!ng Randi — explained that spectators will easily accept unspoken assumptions. He made his point by fooling more than 200 consciousness researchers into thinking that his voice was being amplified by a dummy microphone, and by pretending to read with glasses that were merely empty frames.

Teller pulled coins out of thin air, conference bags and spectacles. He used water from his drinking glass to make a ball disappear. Shedding his normally silent stage persona, he described with eloquence how magicians make their audiences incorrectly link cause and effect. We all infer cause and effect in everyday life. When A precedes B, we conclude that A causes B. The skilled magician takes advantage of this inference by making sure that A (pouring water on a ball) always precedes B (the ball disappearing). However, A does not really cause B. The magician only makes it look so. Audiences assume that each repetition of a trick is done by the same method. "When a good magician repeats an effect, he varies the method in an unpredictable rhythm," said Teller. "That way, each time observers suspect one method, they find their suspicion disproven by the subsequent repetition." For instance, the disappearing ball is first secretly palmed by the other hand, but in the next repetition it is instead dropped on the magician's lap (allowing the magician to show that the other hand is empty).

Johnny Thompson — aka The Great Tomsoni — refers to this principle as "closing all the doors". That is, a good trick will appear to rule out all possible explanations, except for magic. Mac King illustrated these points by impossibly pulling a melon-sized rock out of his shoe — three times. The first two times he purposely used the same method, making it easier to see the trick the second time around. The third time he changed the method, deceiving the audience once again. "Much of our lives is devoted to understanding cause and effect," Teller said. "Magic provides a playground for those rational skills."

He also explained that "action is motion with a purpose". In normal social interactions, we constantly search for the purpose motivating other people's actions. An action with no obvious purpose raises questions. However, when the purpose seems crystal clear, we look no further. "Skilled magicians inform every necessary maneuver (motion) with a convincing intention," said Teller. Thus, the real purpose of the motion (hiding the ball) is hidden by the apparent purpose of the action (pouring the water).

Apollo Robbins, a professional thief who once pickpocketed Jimmy Carter's secret service detail, demonstrated the use of interpersonal distance and eye contact to control a target's gaze and attention. In doing so, he looted, undetected, every single pocket of a journalist from the audience.

James Randi tied the evening together by effortlessly escaping ropes knotted by philosopher Dan Dennett. The intuitive insights offered by magicians will frame future cognitive experiments, from measuring the dynamics of attentional blindness to determining the neural correlates of causal inference. Where in the brain is motion perceived as action? Does this same brain area encode the purpose of the action? For cognitive scientists, the second act of the show will take place in the lab.

Posted by Deric Bownds at 6:25 AM
Email ThisBlogThis!Share to TwitterShare to FacebookShare to Pinterest
Blog Categories: consciousness, culture/politics