Early in my professional career, I had a long discussion with Dan Koshland on a bus ride back from a scientific meeting. This conversation and our subsequent exchanges had a strong influence on me. Koshland was the editor of Science Magazine for many years, and we are all sad at his passing. Here is one of his perspectives articles from the magazine, on the nature of scientific discovery, titled "The Cha-Cha-Cha Theory of Scientific Discovery."

Scientific discoveries are the steps--some small, some big--on the staircase called progress, which has led to a better life for the citizens of the world. Each scientific discovery is made possible by the arrangement of neurons in the brain of one individual and as such is idiosyncratic. In looking back on centuries of scientific discoveries, however, a pattern emerges which suggests that they fall into three categories--Charge, Challenge, and Chance--that combine into a "Cha-Cha-Cha" Theory of Scientific Discovery. (Nonscientific discoveries can be categorized similarly.)

"Charge" discoveries solve problems that are quite obvious--cure heart disease, understand the movement of stars in the sky--but in which the way to solve the problem is not so clear. In these, the scientist is called on, as Nobel laureate Albert Szent-Györgyi put it, "to see what everyone else has seen and think what no one else has thought before." Thus, the movement of stars in the sky and the fall of an apple from a tree were apparent to everyone, but Isaac Newton came up with the concept of gravity to explain it all in one great theory.

"Challenge" discoveries are a response to an accumulation of facts or concepts that are unexplained by or incongruous with scientific theories of the time. The discoverer perceives that a new concept or a new theory is required to pull all the phenomena into one coherent whole. Sometimes the discoverer sees the anomalies and also provides the solution. Sometimes many people perceive the anomalies, but they wait for the discoverer to provide a new concept. Those individuals, whom we might call "uncoverers," contribute greatly to science, but it is the individual who proposes the idea explaining all of the anomalies who deserves to be called a discoverer.

"Chance" discoveries are those that are often called serendipitous and which Louis Pasteur felt favored "the prepared mind." In this category are the instances of a chance event that the ready mind recognizes as important and then explains to other scientists. This category not only would include Pasteur's discovery of optical activity (D and L isomers), but also W. C. Roentgen's x-rays and Roy Plunkett's Teflon. These scientists saw what no one else had seen or reported and were able to realize its importance.

There are well-known examples in each one of the Cha-Cha-Cha categories (see the figure). Two conclusions are immediately apparent. The first is that the original contribution of the discoverer can be applied at different points in the solution of a problem. In the Charge category, originality lies in the devising of a solution, not in the perception of the problem. In the Challenge category, the originality is in perceiving the anomalies and their importance and devising a new concept that explains them. In the Chance category, the original contribution is the perception of the importance of the accident and articulating the phenomenon on which it throws light. 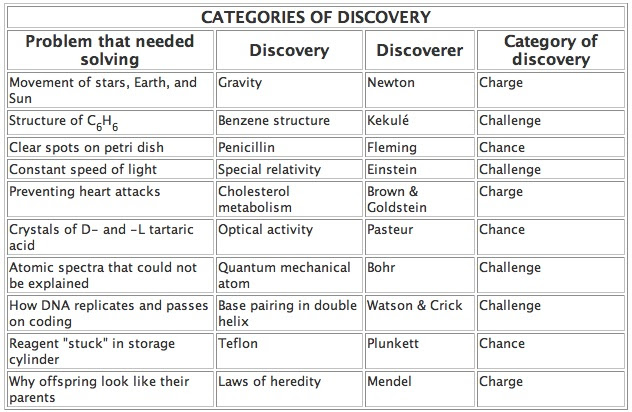 Second, most important discoveries are usually not solved in one "Eureka" moment, as movie scripts sometimes suggest. True, there are moments in which a scientist has been mulling over various facts and problems and suddenly puts them all together, but most major discoveries require scientists to make not one but a number of original discoveries and to persist in pursuing them until a discovery is complete. Thus, to solidify his theory of gravity, Newton developed calculus and laws of physics that he described in his Principia. In a modern example, Michael Brown and Joseph Goldstein not only studied the metabolism of cholesterol but also discovered the role of lipoprotein receptors and the movement of key proteins from the outside to the interior of cells. Great discoveries are frequently covered in textbooks with a single word or phrase, but the concepts actually become solidified as scientific understanding by a series of discoveries.

It is also pertinent to define "the prepared mind" that is required for all of these innovations. Such a mind must be curious and knowledgeable. Curious refers to the fact that the individual is interested in phenomena and is constantly seeking to understand and explain them. Knowledgeable means that the individual has a background of facts and theories as a fertile incubator into which the new facts can fall.

The Cha-Cha-Cha Theory pertains to small everyday findings by scientists as well as the big discoveries that appear in history books. When, for example, a researcher discovers a new chemical isolated from a plant, there is so much understood today that the "charge" to that scientist is to find the formula and structure of the compound. There are now many ways to find the structure of an unknown chemical. Along the way there may be anomalous results that present challenges to the scientist and unexpected findings that must be interpreted by the prepared mind. So each of these represent real discoveries, not as big as a theory of gravity, but important just the same.

Finally, scientific discoveries are not that different from nonscientific discoveries. In the earliest days, there was an obvious "charge" for a set of rules to guide conduct in the close environment of a village that led to social customs and religious guidelines such as the Ten Commandments. As more complex societies emerged, the idea of a democratic vote probably resulted from a "charge" that saw the importance of getting consensus. The Magna Carta and the Bill of Rights came out of "challenges" to an entrenched social system. So when Einstein said that scientific thinking and general thinking were not that different, he probably meant that the patterns of thought of those with "prepared minds" in government and law operated by some of the same general principles as science, even though the methods of science and law are very different.

Someday we may understand the arrangement of neurons in the brain enough to understand how originality can arise. A wild guess would be that the brain of a discoverer has a greater tendency than the average individual to relate facts from highly separate compartments of the brain to each other. As a step to making that Herculean problem tractable, we can at least follow the traditions of scientific reductionism and use the Charge, Challenge, and Chance categories to make the interpretation of brain imaging experiments easier to analyze.

Posted by Deric Bownds at 7:00 AM
Email ThisBlogThis!Share to TwitterShare to FacebookShare to Pinterest
Blog Categories: culture/politics