A collaboration at Washington University between Fair, Raichle, and others has offered a fascinating glimpse at how brain networks controlling our behavior develop from childhood through adolescence to adulthood. Here is their abstract, followed by two figures from the paper (PDF is here).

Human attentional control is unrivaled. We recently proposed that adults depend on distinct frontoparietal and cinguloopercular networks for adaptive online task control versus more stable set control, respectively. During development, both experience-dependent evoked activity and spontaneous waves of synchronized cortical activity are thought to support the formation and maintenance of neural networks. Such mechanisms may encourage tighter "integration" of some regions into networks over time while "segregating" other sets of regions into separate networks. Here we use resting state functional connectivity MRI, which measures correlations in spontaneous blood oxygenation level-dependent signal fluctuations between brain regions to compare previously identified control networks between children and adults. We find that development of the proposed adult control networks involves both segregation (i.e., decreased short-range connections) and integration (i.e., increased long-range connections) of the brain regions that comprise them. Delay/disruption in the developmental processes of segregation and integration may play a role in disorders of control, such as autism, attention deficit hyperactivity disorder, and Tourette's syndrome. 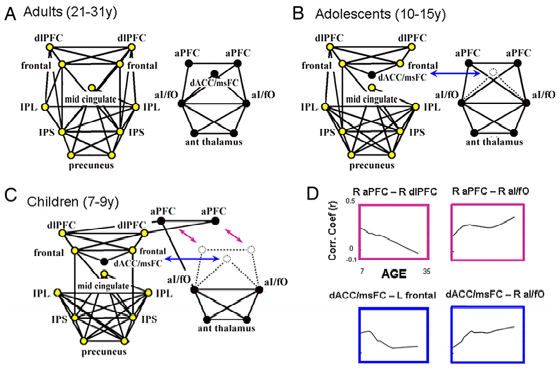 Fig. 2. (click to enlarge) Graphs formed from putative task-control regions in children, adolescents, and adults. ROI (regions of interest) locations are drawn to correspond to topographic brain locations. Right-sided ROIs are displayed on the right and anterior ROIs at the top of each graph. (A) rs-fcMRI revealed two separate control networks in adults as previously described (6). (B) The top 75 connections in adolescents revealed a similar two-component system as seen in adults; however, the dACC/msFC region was incorporated into the frontoparietal network. (C) The top 75 connections in children revealed a significant deviation from the adult architecture. The two networks were connected by a bridge connection (aPFC–dlPFC). The dACC/msFC region was incorporated into the frontoparietal network. Children lacked connections from the dlPFC to IPS and IPL. (D) Fit LOWESS curves of connection strength (r) versus age. As connection strength between the dACC/msFC region and the dF cortex decreased with age, correlation strength increased between the dACC/msFC and aI/fO regions. The aPFC region also decreased its connection strength with the dlPFC region with age but was already strongly connected to the aI/fO region in children. The strength of the aI/fO–aPFC connection was maintained into adulthood. 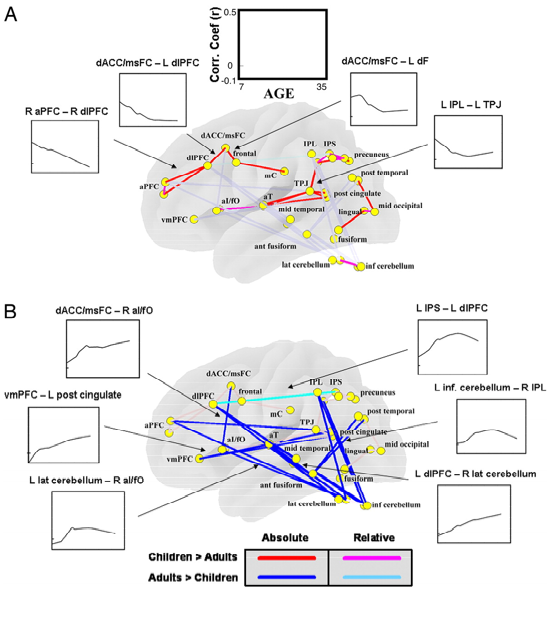 Posted by Deric Bownds at 6:50 AM
Email ThisBlogThis!Share to TwitterShare to FacebookShare to Pinterest
Blog Categories: attention/perception