Our evolving human nature as primary cause of the industrial age?

It has been commonly assumed that technology and institutional changes were much more important than changes in basic human nature in triggering the sudden escape from subsistence poverty towards personal wealth and production that occurred at the end of the 18th century. The Aug. 7 issue of the NYTimes has a review of the work of Gregory Clark, who argues that the Industrial Revolution occurred because of a change in the nature of the human population. Through analysis of ancient wills, Clark found that:

Generation after generation, the rich had more surviving children than the poor... there must have been constant downward social mobility as the poor failed to reproduce themselves and the progeny of the rich took over their occupations...The modern population of the English is largely descended from the economic upper classes of the Middle Ages...As the progeny of the rich pervaded all levels of society...the behaviors that made for wealth could have spread with them...several aspects of what might now be called middle-class values changed significantly from the days of hunter gatherer societies to 1800. Work hours increased, literacy and numeracy rose, and the level of interpersonal violence dropped....Another significant change in behavior, Dr. Clark argues, was an increase in people’s preference for saving over instant consumption, which he sees reflected in the steady decline in interest rates from 1200 to 1800.

I knew I had read, and written, about this sort of idea. After thrashing about looking for it, I was embarrassed to simply find it in my Biology of Mind book, in the chapter on Hominid Mind:

Students of animal behavior use the term "phenotypic cloning" to describe the process by which parents can so firmly impress behaviors on their offspring that the behaviors (phenotypes) seem to be inherited. (In spite of what we like to think, we all act remarkably like our parents as we grow older.) A core point is the argument that differences in behavioral styles between one family line and another provide a context for natural selection. The behaviors that work best are passed on because of differential reproductive success, and less adaptive behaviors are lost from the "phenotypic pool" analogous to the gene pool of genetics. This mechanism acts also at the level of cultures of humans and animals, and in this context it is termed group selection. Over longer periods of time, genetic changes in individuals that facilitate the adaptive behaviors adopted by a group might then be selected for. This is the Baldwin effect mentioned in the section "Co-evolution of Humans and Their Tools" and is a scenario offered by some evolutionary psychologists.

A main point of this post is to pass on the elegant graphic in the NYTimes article, which summarizes Clark's ideas: 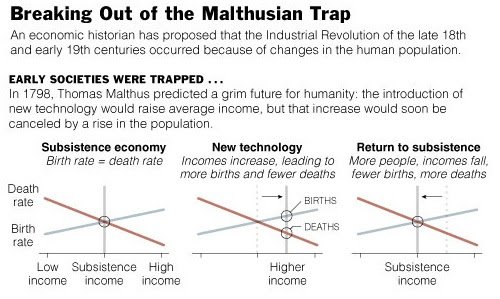 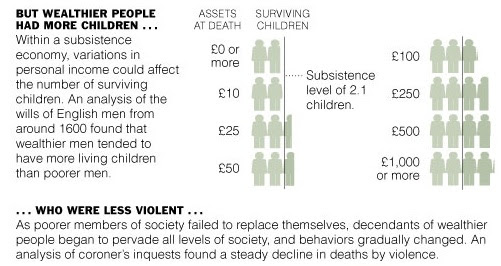 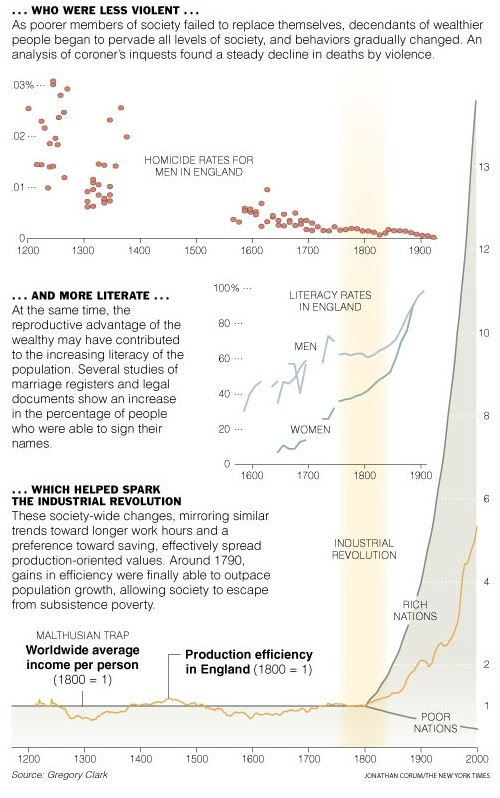 Posted by Deric Bownds at 6:30 AM
Email ThisBlogThis!Share to TwitterShare to FacebookShare to Pinterest
Blog Categories: culture/politics, human evolution