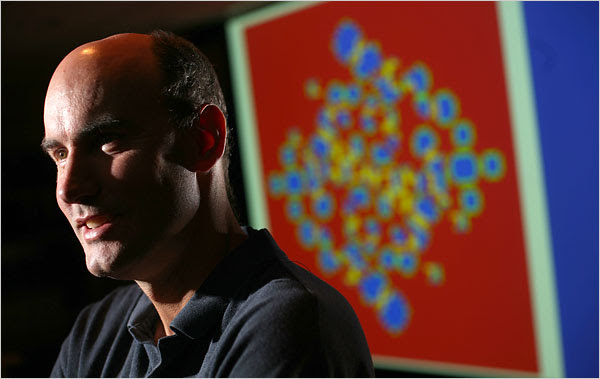 Carl Zimmer writes an interesting profile of the work and ideas of Marin Nowak at Harvard in the July 31 NY Times Science section (PDF here). Here are some edited clips:

Nowak argues that cooperation is one of the three basic principles of evolution. The other two are mutation and selection. On their own, mutation and selection can transform a species, giving rise to new traits like limbs and eyes. But cooperation is essential for life to evolve to a new level of organization. Single-celled protozoa had to cooperate to give rise to the first multicellular animals. Humans had to cooperate for complex societies to emerge.

The article describes Nowak's work with models that are intellectual descendants of the Prisoner's Dilemma puzzle.

These models incorporate neighborhoods of players in which tight clusters of cooperators emerge, and defectors elsewhere in the network are not able to undermine their altruism. The emergence of cooperation is described with a simple equation: B/C>K. That is, cooperation will emerge if the benefit-to-cost (B/C) ratio of cooperation is greater than the average number of neighbors (K)...Nowak and his colleagues also pioneered a version of the Prisoner’s Dilemma in which players acquire reputations. They found that if reputations spread quickly enough, they could increase the chances of cooperation taking hold. Players were less likely to be fooled by defectors and more likely to benefit from cooperation.