David Kent writes a well balanced article in American Scientist on issues of human longevity. A graphic and some text on the consequences of lifespan-prolonging therapies on population growth and demographic structure:

In the past century, disease-specific medicine reduced mortality at all ages, including the economically productive years between one's 20s and 60s. Historical trends show an increasing "rectangularization" of mortality rates over the past century, meaning that most people survive to an advanced age, at which point there is a precipitous increase in the number of deaths (green curves). Such data have led some researchers to theorize that the human lifespan is reaching an "ideal" length, beyond which substantial extension is not possible. However, discoveries about the basic mechanisms of aging may permit life expectancy to extend beyond this theoretical limit (red curves). 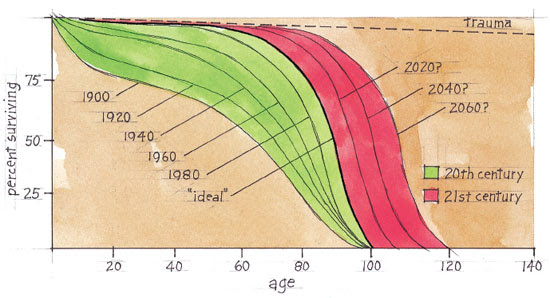 The rectangularization of the mortality curve implies that life-prolonging therapies will add years only at the end of life. Unless there is a shift in the retirement age, 21st-century medical innovation will have an even more dramatic effect on the dependency ratio (a measure of the portion of a population composed of those either too old or too young to work). Maintaining retirement as a widespread option at around 65, already an economic stretch, undoubtedly will become untenable. The price of longer life will almost certainly be a longer work life.