Development of sharing in human children. 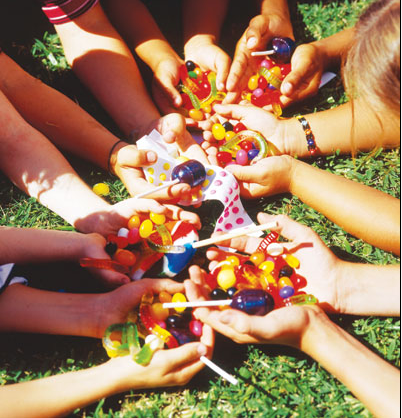 Unlike chimpanzees, young children develop a particular form of other-regarding behaviour, called inequality aversion, between the ages of three and eight. On average, three- and four- year-olds behave selfishly whereas seven- and eight-year-olds prefer situations that remove inequality - within their group, that is. Here is the abstract from Fehr et al, who carried out studies with 229 Swiss boys and girls between 3 and 8 years of age to note changes in other-regarding behavior with age:

Human social interaction is strongly shaped by other-regarding preferences, that is, a concern for the welfare of others. These preferences are important for a unique aspect of human sociality—large scale cooperation with genetic strangers—but little is known about their developmental roots. Here we show that young children's other-regarding preferences assume a particular form, inequality aversion that develops strongly between the ages of 3 and 8. At age 3–4, the overwhelming majority of children behave selfishly, whereas most children at age 7–8 prefer resource allocations that remove advantageous or disadvantageous inequality. Moreover, inequality aversion is strongly shaped by parochialism, a preference for favoring the members of one's own social group. These results indicate that human egalitarianism and parochialism have deep developmental roots, and the simultaneous emergence of altruistic sharing and parochialism during childhood is intriguing in view of recent evolutionary theories which predict that the same evolutionary process jointly drives both human altruism and parochialism.

Posted by Deric Bownds at 5:00 AM
Email ThisBlogThis!Share to TwitterShare to FacebookShare to Pinterest
Blog Categories: human development