Predicting the choices of undecided voters - the unseen mind

Not to much of a surprise, but voters who declare themselves to be undecided may be fooling themselves, and are actually unconsciously biased towards one of the choices presented. As Wilson and Bar-Anan point out in their review of the work of Galdi et al.

Social psychologists have discovered an adaptive unconscious that allows people to size up the world extremely quickly, make decisions, and set goals--all while their conscious minds are otherwise occupied. The human mind operates largely out of view of its owners, possibly because that's the way it evolved to work initially, and because that's the way it works best, under many circumstances. Without such an efficient, powerful, and fast means of understanding and acting on the world, it would be difficult to survive. We would be stuck pondering every little decision, such as whether to put our left or right foot forward first, as the world sped by (2-7). But as a result, we are often strangers to ourselves, unable to observe directly the workings of our own minds. 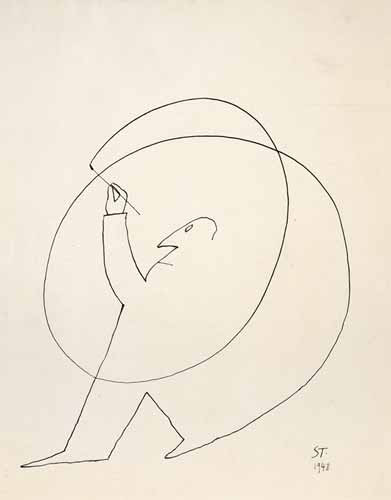 Confabulation. As in this drawing by Saul Steinberg, people construct images of themselves. In real life, people do not realize that their self-knowledge is a construction, and fail to recognize that they possess a vast adaptive unconscious that operates out of their conscious awareness.

Here is the abstract of Galdi et al. that supports this picture using computer-based measures that assess implicit attitudes and traits:

Common wisdom holds that choice decisions are based on conscious deliberations of the available information about choice options. On the basis of recent insights about unconscious influences on information processing, we tested whether automatic mental associations of undecided individuals bias future choices in a manner such that these choices reflect the evaluations implied by earlier automatic associations. With the use of a computer-based, speeded categorization task to assess automatic mental associations (i.e., associations that are activated unintentionally, difficult to control, and not necessarily endorsed at a conscious level) and self-report measures to assess consciously endorsed beliefs and choice preferences, automatic associations of undecided participants predicted changes in consciously reported beliefs and future choices over a period of 1 week. Conversely, for decided participants, consciously reported beliefs predicted changes in automatic associations and future choices over the same period. These results indicate that decision-makers sometimes have already made up their mind at an unconscious level, even when they consciously indicate that they are still undecided.

A 'training of the conscious by the unconscious' is suggested by the observation that the conscious beliefs of the decided voters, which, at the first question period, showed no correlation with their automatic or implicit preferences, did, in fact, predict their implicit preferences during the second session. This suggests that the interaction between unconscious and conscious cognition is a two-way street.
Posted by Deric Bownds at 5:30 AM
Email ThisBlogThis!Share to TwitterShare to FacebookShare to Pinterest
Blog Categories: acting/choosing, culture/politics, unconscious