R. Christopher deCharms offers an interesting review article on exploring the mind-body interface with neuroimaging. Here is the abstract, followed by one figure. The PDF is here.

For centuries people have aspired to understand and control the functions of the mind and brain. It has now become possible to image the functioning of the human brain in real time using functional MRI (fMRI), and thereby to access both sides of the mind–brain interface — subjective experience (that is, one's mind) and objective observations (that is, external, quantitative measurements of one's brain activity) — simultaneously. Developments in neuroimaging are now being translated into many new potential practical applications, including the reading of brain states, brain–computer interfaces, communicating with locked-in patients, lie detection, and learning control over brain activation to modulate cognition or even treat disease. 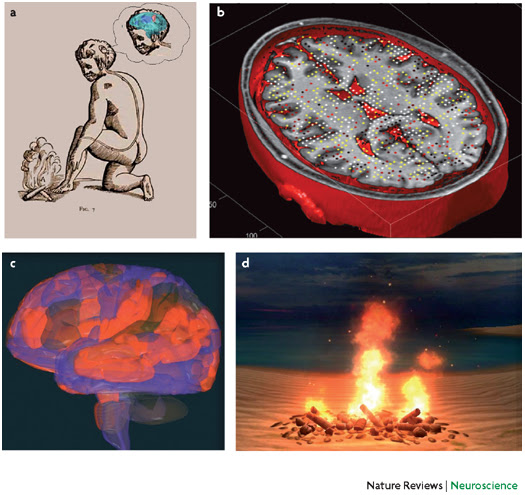 a) Descartes used introspection as a way to perceive the mechanisms of the mind. This approach to observing the mind–brain interface is what people were limited to in the absence of technology. b) Today, using real-time functional MRI, it is possible to measure the level of activation from approx216 brain locations per second. Here, measured activation levels are represented as colours that have been overlaid onto a three-dimensional rendered set of anatomical brain images. c) Information from individual spatial points can be segregated into multiple anatomically defined three-dimensional regions of interest. Here the activation levels (represented as colours) of three brain regions are rendered on a translucent 'glass brain' view. d) Activation in these regions can either be plotted second-by-second in real time or can be presented to subjects in more abstract forms, such as this virtual-reality video display of a beach bonfire, in which each of the three elements of the flickering fire corresponds to activation in a particular brain region. Brain activation can control arbitrarily complex elements of computer-generated scenarios.