Watching the testosterone crash in anxious men who lose a contest.

This work from Maner et al. makes a rather blunt point:

Although theory suggests a link between social anxiety and social dominance, direct empirical evidence for this link is limited. The present experiment tested the hypothesis that socially anxious individuals, particularly men, would respond to a social-dominance threat by exhibiting decrements in their testosterone levels, an endocrinological change that typically reflects pronounced social submission in humans and other animals. Participants were randomly assigned to either win or lose a rigged face-to-face competition with a confederate. Although no zero-order relationship between social anxiety and level of testosterone was observed, testosterone levels showed a pronounced drop among socially anxious men who lost the competition. No significant changes were observed in nonanxious men or in women. This research provides novel insight into the nature and consequences of social anxiety, and also illustrates the utility of integrating social psychological theory with endocrinological approaches to psychological science. 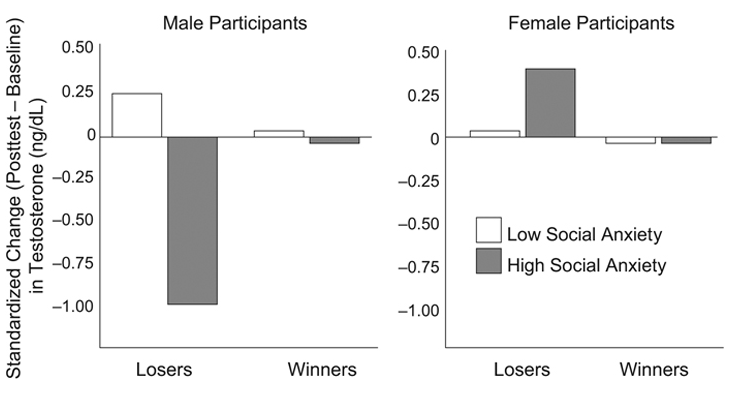 Figure: Change in testosterone level as a function of experimental condition (losers vs. winners) and social anxiety (1 SD above the mean vs. 1 SD below the mean). Results are presented separately for men and women. Change scores were standardized within each gender.

Posted by Deric Bownds at 5:15 AM
Email ThisBlogThis!Share to TwitterShare to FacebookShare to Pinterest
Blog Categories: fear/anxiety/stress