Nicholas Wade points to the work of Grant and colleagues on how the complexity of nerve interconnections (synapses) has increased during evolution as the variety of their protein components has increased from a few to several hundred. Vertebrate synapses have about 1,000 different proteins, assembled into 13 molecular machines, one of which is built from 183 different proteins. The human brain has about 100 billion neurons, interconnected at 100 trillion synapses. Grant provides an analogy: 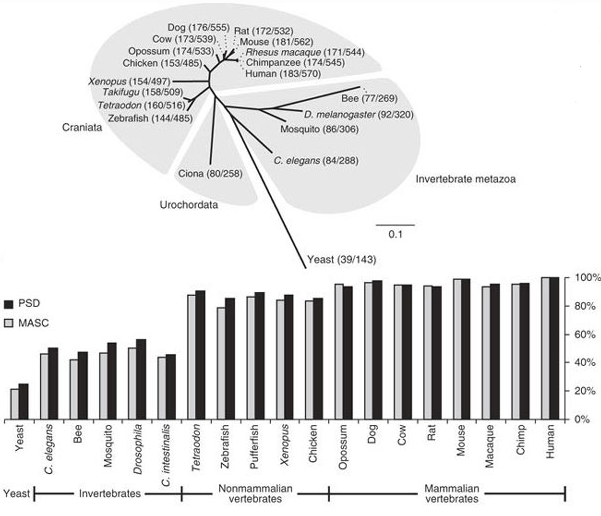 The top part of the figure (click to enlarge) shows the phylogenetic relationships of the species studied. The number of varieties of two signaling complexes, NMDA receptor (NRC or MASC) / postsynaptic density (PSD) are in parentheses. The lower half shows the occurrences of PSD and MASC homologs found in each of the 19 species as a percentage of those found in human.
Posted by Deric Bownds at 5:40 AM
Email ThisBlogThis!Share to TwitterShare to FacebookShare to Pinterest
Blog Categories: evolution/debate, genes