Sarcasm and the right parahippocampal gyrus... 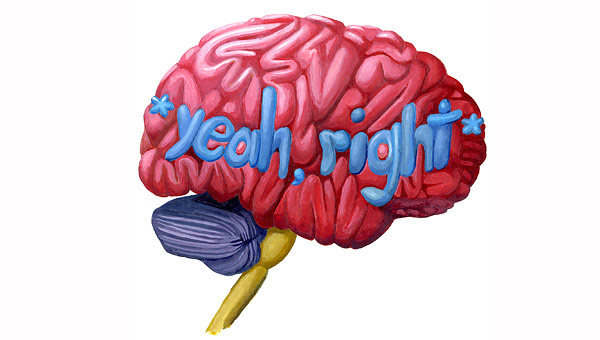 Getting inside someone's else's head to realize when they are ironic, sarcastic, or angry is one of our most advanced 'theory of mind' capabilities. You would expect the brain imaging people to show the frontotemporal lobe to light up when sarcasm is being detected, since one of the early signs of frontotemporal dementia is loss of the ability to detect sarcasm. Hurley describes the work of Rankin and others looking at brain correlates of being able to detect sarcasm based entirely on paralinguistic (non-verbal) cues (check out the link to the videos used).

...magnetic resonance scans revealed that the part of the brain lost among those who failed to perceive sarcasm was not in the left hemisphere of the brain, which specializes in language and social interactions, but in a part of the right hemisphere previously identified as important only to detecting contextual background changes in visual tests....The right parahippocampal gyrus must be involved in detecting more than just visual context — it perceives social context as well....The discovery fits with an increasingly nuanced view of the right hemisphere’s role...The left hemisphere does language in the narrow sense, understanding of individual words and sentences...But it’s now thought that the appreciation of humor and language that is not literal, puns and jokes, requires the right hemisphere.

So is it possible that Jon Stewart, who wields sarcasm like a machete on “The Daily Show,” has an unusually large right parahippocampal gyrus?..“His is probably just normal,” Dr. Rankin said. “The right parahippocampal gyrus is involved in detecting sarcasm, not being sarcastic...I bet Jon Stewart has a huge right frontal lobe; that’s where the sense of humor is detected on M.R.I.”...A spokesman for Mr. Stewart said he would have no comment — not that a big-shot television star like Jon Stewart would care about the size of his neuroanatomy.

Posted by Deric Bownds at 5:15 AM
Email ThisBlogThis!Share to TwitterShare to FacebookShare to Pinterest
Blog Categories: consciousness, psychology, social cognition