The futurist: machines as smart as ourselves 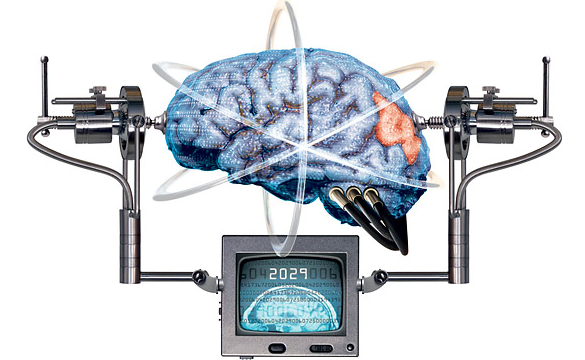 John Tierney does a nice write up of the debate over the ideas of futurist Ray Kurzweil. (I've always thought that Kurzweil was simple proof of the proposition that if you propose any 10 crazy things, one of them will turn out to be right. People remember the correct prophesy, and forget the mistakes.) Still.... the guy has been right on a number of times. Here is part of the discussion of our cognitive/emotional repertoire being bested by machines ( (possibly piggybacked onto our biological hardware). This event is referred to as "the singularity." Kurzweil proposes that:

..by the 2020s we’ll be adding computers to our brains and building machines as smart as ourselves...This serene confidence is not shared by neuroscientists like Vilayanur S. Ramachandran, who discussed future brains with Dr. Kurzweil at the festival. It might be possible to create a thinking, empathetic machine, Dr. Ramachandran said, but it might prove too difficult to reverse-engineer the brain’s circuitry because it evolved so haphazardly...“My colleague Francis Crick used to say that God is a hacker, not an engineer,” Dr. Ramachandran said. “You can do reverse engineering, but you can’t do reverse hacking.”...Dr. Kurzweil’s predictions come under intense scrutiny in the engineering magazine IEEE Spectrum, which devotes its current issue to the Singularity. Some of the experts writing in the issue endorse Dr. Kurzweil’s belief that conscious, intelligent beings can be created, but most think it will take more than a few decades....He is accustomed to this sort of pessimism and readily acknowledges how complicated the brain is. But if experts in neurology and artificial intelligence (or solar energy or medicine) don’t buy his optimistic predictions, he says, that’s because exponential upward curves are so deceptively gradual at first.

“Scientists imagine they’ll keep working at the present pace,” he told me after his speech. “They make linear extrapolations from the past. When it took years to sequence the first 1 percent of the human genome, they worried they’d never finish, but they were right on schedule for an exponential curve. If you reach 1 percent and keep doubling your growth every year, you’ll hit 100 percent in just seven years.”

Dr. Kurzweil is so confident in these curves that he has made a $10,000 bet with Mitch Kapor, the creator of Lotus software. By 2029, Dr. Kurzweil wagers, a computer will pass the Turing Test by carrying on a conversation that is indistinguishable from a human’s.

You should also check out John Horgan's caustic comments on the whole singularity bit in a special IEEE spectrum feature, which ends with:

Let's face it. The singularity is a religious rather than a scientific vision. The science-fiction writer Ken MacLeod has dubbed it “the rapture for nerds,” an allusion to the end-time, when Jesus whisks the faithful to heaven and leaves us sinners behind.

Such yearning for transcendence, whether spiritual or technological, is all too understandable. Both as individuals and as a species, we face deadly serious problems, including terrorism, nuclear proliferation, overpopulation, poverty, famine, environmental degradation, climate change, resource depletion, and AIDS. Engineers and scientists should be helping us face the world's problems and find solutions to them, rather than indulging in escapist, pseudoscientific fantasies like the singularity.

Posted by Deric Bownds at 5:30 AM
Email ThisBlogThis!Share to TwitterShare to FacebookShare to Pinterest
Blog Categories: consciousness, futures, technology