The brain's default network - a review

Buckner et al. offer a review of work what our brains are doing when we are not focused on the external environment. This is an open access article in a new annual volume, "The Year in Cognitive Neuroscience," being initiated by the New York Academy of Sciences. (Table of contents of this first issue is here. ) I am passing on the abstract and one central figure and legend from the article:

Thirty years of brain imaging research has converged to define the brain's default network—a novel and only recently appreciated brain system that participates in internal modes of cognition. Here we synthesize past observations to provide strong evidence that the default network is a specific, anatomically defined brain system preferentially active when individuals are not focused on the external environment. Analysis of connectional anatomy in the monkey supports the presence of an interconnected brain system. Providing insight into function, the default network is active when individuals are engaged in internally focused tasks including autobiographical memory retrieval, envisioning the future, and conceiving the perspectives of others. Probing the functional anatomy of the network in detail reveals that it is best understood as multiple interacting subsystems. The medial temporal lobe subsystem provides information from prior experiences in the form of memories and associations that are the building blocks of mental simulation. The medial prefrontal subsystem facilitates the flexible use of this information during the construction of self-relevant mental simulations. These two subsystems converge on important nodes of integration including the posterior cingulate cortex. The implications of these functional and anatomical observations are discussed in relation to possible adaptive roles of the default network for using past experiences to plan for the future, navigate social interactions, and maximize the utility of moments when we are not otherwise engaged by the external world. We conclude by discussing the relevance of the default network for understanding mental disorders including autism, schizophrenia, and Alzheimer's disease. 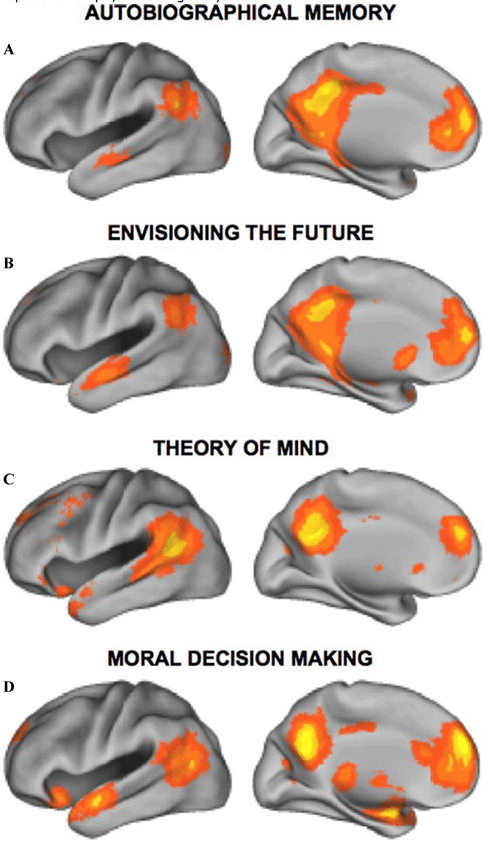 The default network is activated by diverse forms of tasks that require mental simulation of alternative perspectives or imagined scenes. Four such examples from the literature illustrate the generality. (A) Autobiographical memory: subjects recount a specific, past event from memory. (B) Envisioning the future: cued with an item (e.g., dress), subjects imagine a specific future event involving that item. (C) Theory of mind: subjects answer questions that require them to conceive of the perspective (belief) of another person. (D) Moral decision making: subjects decide upon a personal moral dilemma. Note that all the studies activate strongly PCC/Rsp and dMPFC. Active regions also include those close to IPL and LTC, although further research will be required to determine the exact degree of anatomic overlap. It seems likely that these maps represent multiple, interacting subsystems.

Posted by Deric Bownds at 5:45 AM
Email ThisBlogThis!Share to TwitterShare to FacebookShare to Pinterest
Blog Categories: consciousness