Why Are Conservatives Happier Than Liberals?

Napier and Jost offer an interesting perspective in their article in Psychological Science. Here is an edited excerpt from their general discussion:

In three studies, using nationally representative samples from the United States and nine additional countries, we consistently found that conservatives (or right-wingers) are happier than liberals (or left-wingers). This ideological gap in happiness is not accounted for by demographic differences or by differences in cognitive style (liberals becoming less satisfied with their current situation because of the deleterious effects of rumination and introspection - versus conservatives tending to prefer relatively simple, unambiguous answers to life's questions). We did find, however, that the rationalization of inequality—a core component of conservative ideology — helps to explain why conservatives are, on average, happier than liberals. These findings are consistent with system-justification theory, which posits that viewing the status quo (with its attendant degree of inequality) as fair and legitimate serves a palliative function. The studies suggest that conservatism provides an emotional buffer against the negative hedonic impact of inequality in society. 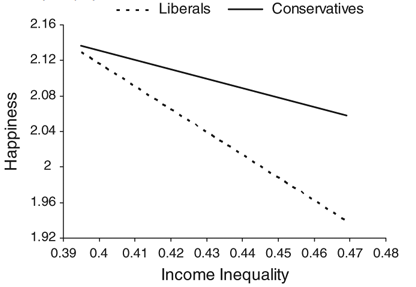 The relation between political orientation and self-reported happiness as a function of the Gini inequality index, 1974 through 2004.

Posted by Deric Bownds at 5:40 AM
Email ThisBlogThis!Share to TwitterShare to FacebookShare to Pinterest
Blog Categories: culture/politics, happiness