The June 2008 issue of Scientific American has an article by Zak on the neurobiology of trust, and the hormone oxytocin. I've previously mentioned Zak's work, and if you enter 'oxytocin' in MindBlog's search box in the left column you will pull up numerous previous posts on oxytocin, trust, and affiliative behaviors, some of which the Zak article mentions (for example, inhaling a nasal spray containing oxytocin increases trusting behaviors). I thought I would show one graphic from the article relevant to the fact that trust is among the strongest known predictors of a country’s wealth. Nations with low levels tend to be poor. Societies with low levels are poor because the inhabitants undertake too few of the long-term investments that create jobs and raise incomes. Such investments depend on mutual trust that both sides will fulfill their contractual obligations. 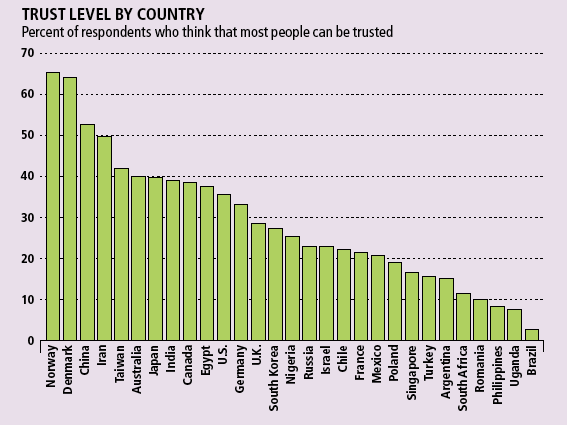 Posted by Deric Bownds at 5:30 AM
Email ThisBlogThis!Share to TwitterShare to FacebookShare to Pinterest
Blog Categories: happiness, human evolution