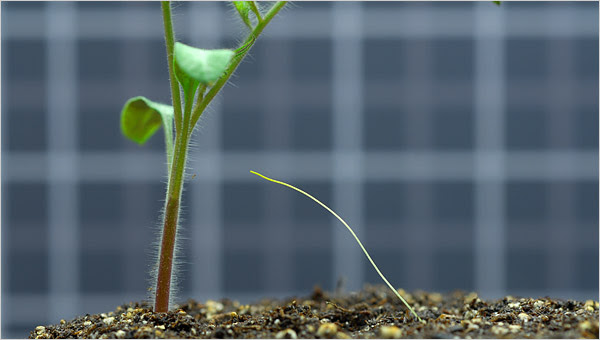 I suppose it is a bit of a stretch to call it social cognition, but it is recognition of kin and non-kin species, now discovered in plants. This is a bit of a shock, in part because most animals have not even been shown to have the ability to recognize relatives, despite the huge advantages in doing so. Some plants not only avoid competing with kin by not sending roots towards them, but also sniff out their victims. We're talking about careful experiments here, not New Age fantasies about plant feelings and sentience. Check out the account by Yoon. This excerpt is from its ending:

Recent debates have revolved around a longstanding question: which of the abilities and attributes that scientists have long considered the realm of just animals, like sensing, learning and memory, can sensibly be transferred to plants?...At the extreme of the equality movement, but still within mainstream science, are the members of the Society of Plant Neurobiology, a new group whose Web site describes it as broadly concerned with plant sensing....The very name of the society is enough to upset many biologists. Neurobiology is the study of nervous systems — nerves, synapses and brains — that are known just in animals. That fact, for most scientists, makes the notion of plant neurobiology a combination of impossible, misleading and infuriating....Thirty-six authors from universities that included Yale and Oxford were exasperated enough to publish an article last year, “Plant Neurobiology: No Brain, No Gain?” in the journal Trends in Plant Science. The scientists chide the new society for discussing possibilities like plant neurons and synapses, urging that the researchers abandon such “superficial analogies and questionable extrapolations.”

Defenders point out that 100 years ago, some scientists were equally adamant that plant physiology did not exist. Today, that idea is so obviously antiquated that it could elicit a good chuckle from the many scientists in that field...As for the “superficial analogies,” the new wave botanists are well aware that plants do not have exact copies of animal nervous systems...“No one proposes that we literally look for a walnut-shaped little brain in the root or shoot tip,” five authors wrote in defense of the new group. Instead, the researchers say, they are asking that scientists be open to the possibility that plants may have their own system, perhaps analogous to an animal’s nervous system, to transfer information around the body....“Plants do send electrical signals from one part of the plant to another,” said Dr. Eric D. Brenner, a botanist at the New York Botanical Garden and a member of the Society of Plant Neurobiology...Although those signals have been known for 100 years, scientists have no idea what plants do with them...“No one’s asked how all that information is integrated in a plant, partly because we’ve convinced ourselves that it isn’t,” Dr. Brenner said. “People have been intimidated from asking that question.”

Posted by Deric Bownds at 5:30 AM
Email ThisBlogThis!Share to TwitterShare to FacebookShare to Pinterest
Blog Categories: social cognition